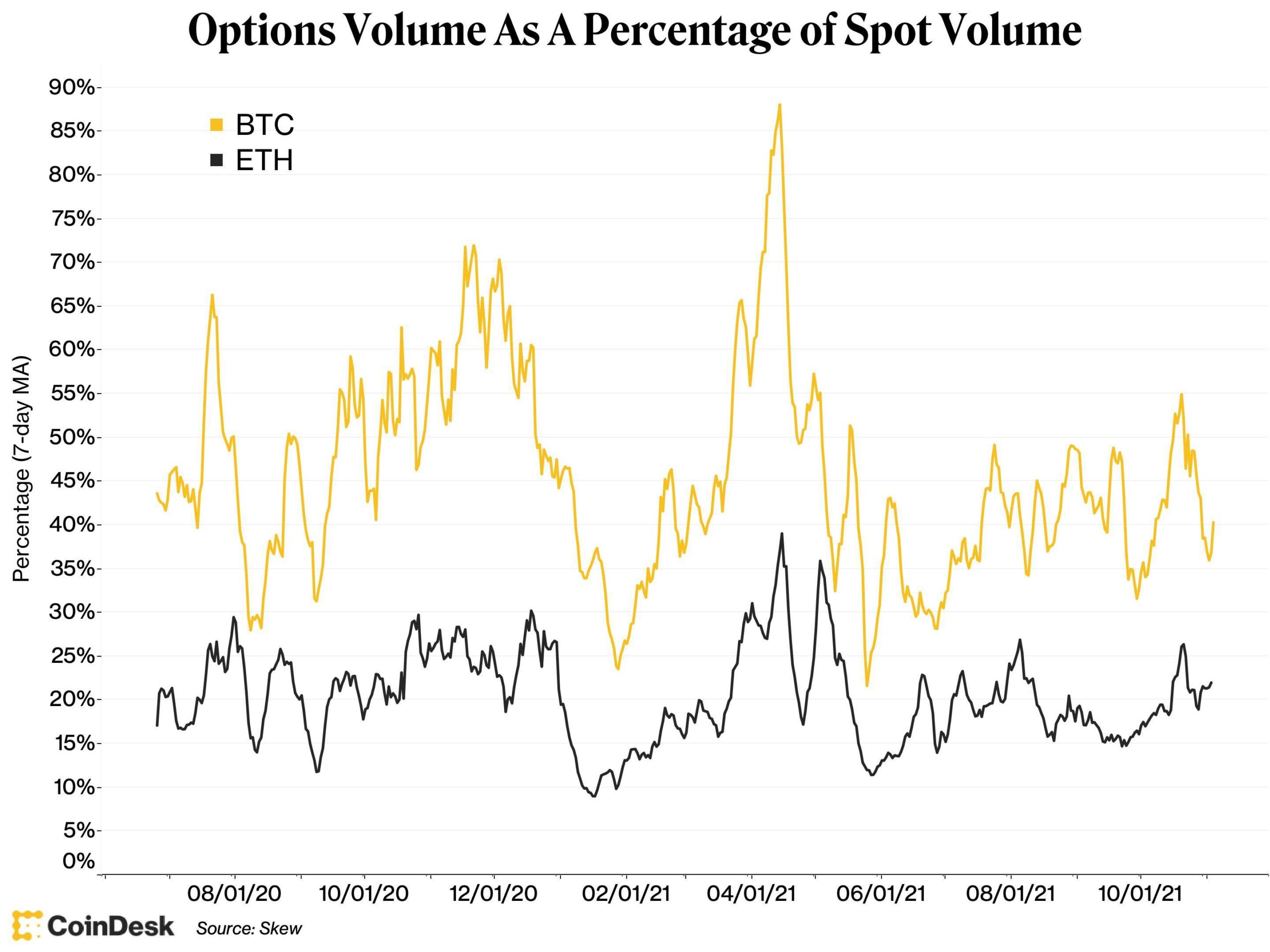 What Bitcoin and Ether’s Options Tell Us About Their Maturity

In one of the most iconic scenes in American TV history, Jan Brady complains to her parents about all the attention her sister receives. “Marcia, Marcia, Marcia … I’m tired of being in Marcia’s shadow all the time,” Jan whines to her mom on season 3, episode 10 of “The Brady Bunch” in 1971.

One could almost hear ether (ETH) kvetch in much the same manner about bitcoin (BTC).

After all, ether is up around 500% since Jan. 1 while bitcoin has only doubled in that time. Yet it’s bitcoin that is legal tender in one country and has several futures-based exchange-traded funds (ETFs). And then some.

While they are in the same asset class, comparing bitcoin to ether is tantamount to comparing apples to oranges for those with more than a cursory understanding of crypto. It turns out the derivatives markets agree about the difference in at least one subtle way: the relative volume of ether options to the spot market compared to that of bitcoin.

That matters because higher options volume relative to spot is a sign of a mature market and can help with price discovery.

To be sure, both ether and bitcoin have shown astounding growth in both their spot and options markets over the past year.

[The seven bitcoin and ether spot exchanges tracked in this piece were Bitstamp, Coinbase, FTX, Gemini, ItBit, Kraken and LMAX Digital. While exchanges such as Binance were not included, one can still get a sense of the relative size of each spot market.]

Bitcoin’s market was even bigger to start. The October daily spot volume average in 2020 was $395 million while the options market was $206 million. Fast forward 12 months later and it was $2.2 billion and $989 million, respectively.

Still, when it comes to growth, ether was the more impressive of the two. Its spot market grew roughly 16x in one year and its options market nearly 15x. Bitcoin’s numbers gained “just” 5.7x and 4.8x, respectively. That’s a dream for any other market but small potatoes compared to ether.

Yet when looking at those numbers, the relative size of each currency’s options market to its spot market stood out.

Again, the spot data we looked at are just from a handful of the exchanges where the assets trade. However, these were some of the biggest exchanges in the world, and their data is generally reliable. Therefore, they were helpful in giving a sense of what’s happening in the markets.

Going back to mid-June 2020 to now, bitcoin options volumes averaged 45% of spot while it was just 20% for ether. That isn’t to say it stayed at that level.

Just eyeballing it, you’ll see that bitcoin’s options volumes relative to spot have stayed within a range of 30% and 50% since June. The market, of course, had a massive spike in options in April, where it nearly rivaled the spot market, even surpassing it on April 8. Ether’s options market appears to have more modest ranges, generally staying between 15% and 25% over the past five months or so.

For those who care, the standard deviation for bitcoin’s ratio was 17% while it was a tighter 5% for ether since June 2020.

Of course, we’re still in the early stages of the crypto derivatives market. One exchange, Deribit, has the lion’s share of both bitcoin and ether’s options trades. “It’s still nascent,” Luuk Strijers, the exchange’s chief commercial officer, told CoinDesk, adding his prediction that growth will be fast as the market is still maturing.

Stephen Ehrlich, CEO of brokerage Voyager Digital, concurs, saying that crypto options are similar to where equity options were two decades ago but will eventually catch up. “I think it’s just a matter of time,” he told CoinDesk TV’s “First Mover” program on Friday. “As those products become more easily to obtain and to trade, you’ll see that volume grow. But we’re still a few years from that happening.”

And in that still-maturing market, it’s bitcoin which is the older sister. That brings us back to the Brady Bunch.

For those who haven’t memorized that episode, Jan hid Marcia’s trophies in the closet out of jealousy.

“Every time Marcia turns around, they hand her a blue ribbon or something,” Jan laments to her mother Carol. “All I hear all day long at school is how great Marcia is at this, or how wonderful Marcia did that.”

“Jan, you’re not in anybody’s shadow,” Carol consoles her second daughter. “Marcia’s three years older than you. She should have more to show for herself.”

Look, there’s a lot more to this episode, where Carol tells Jan to go out and do something special, and Jan writes some essay for a contest and brags about winning when she doesn’t and… That’s not the point.

The point is that bitcoin is Marcia here. It’s six years older than ether. It should have more to show for itself, including more options volume relative to its spot market than ether.

And all the other cryptocurrencies out there have their own thing going on, much like each of the Bradys – I’m not sure where Alice the housekeeper falls, but she may be XRP.

Eventually, they will mature. The oldest Brady kid is 67 and the youngest is now 60. That will happen in crypto and we can expect their options markets will grow, too. Just hope they don’t all do a three-part episode in Hawaii.