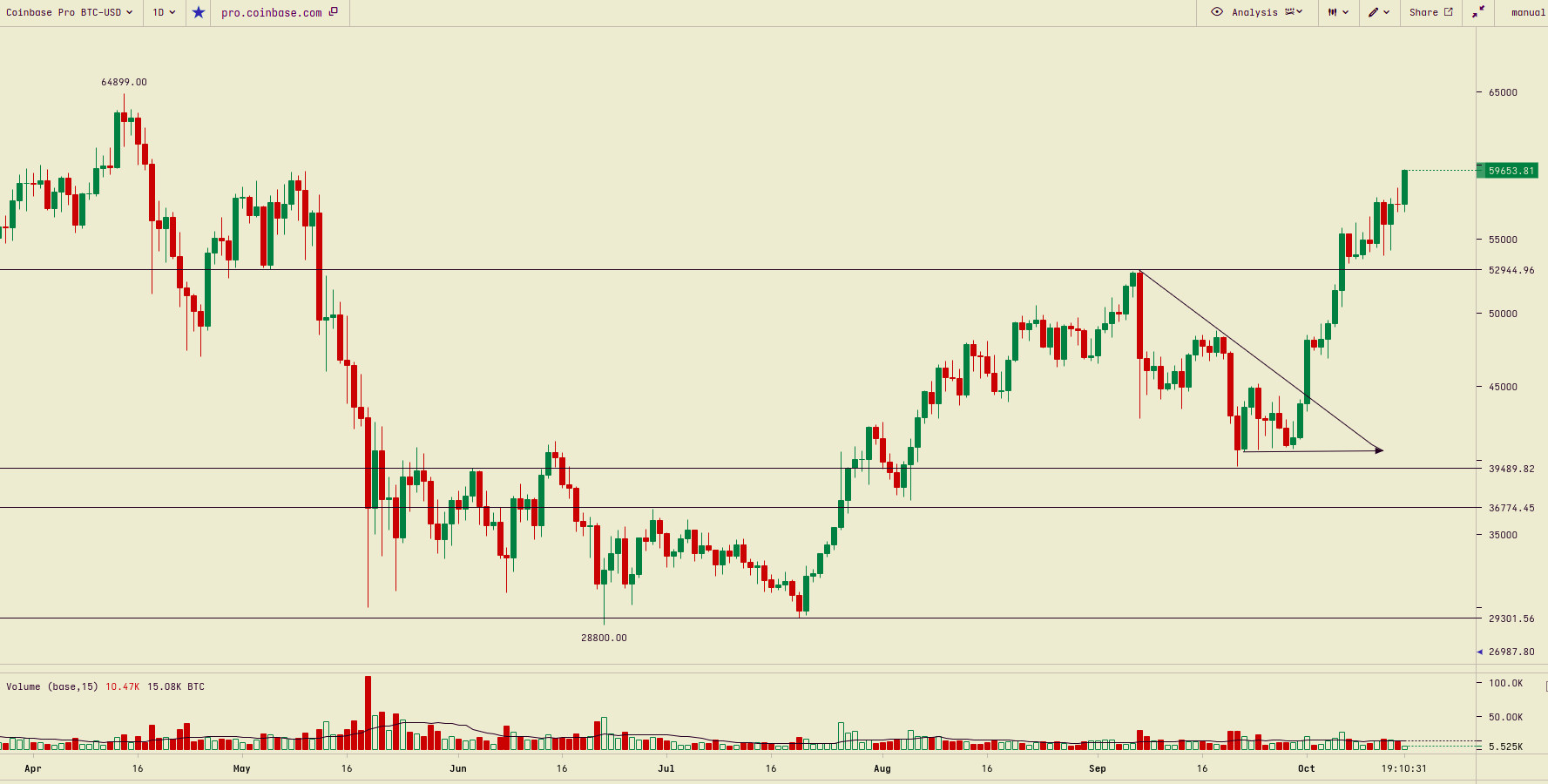 This week has been great for the crypto market since the market crash. With Bitcoin ETF approval it would be rising fast to touch it’s all-time high pulling the altcoins along with it. The outliers like Shiba Inu, FTM, BNB, and Dot have performed extremely well, rising in prices as well as trading volume. With more personalities coming out in support for the space it has raised confidence and relief among the investors small and big alike. The NFTs saw a spike with now the likes of Paris Hilton being a part of it. The crypto market capitalization currently is at 2.44 trillion with Bitcoin dominating about 46% of the market.

At the time of writing, Bitcoin is trading around $59,670 reflecting a loss of about 3.11% approximately over the period of 24-hours.

Bitcoin has witnessed a significant rally, as it crossed the $53,000 mark, and regained the $1 trillion market capitalization feat. Volumes have shown good traction, and momentum is strong too. Yesterday the bulls took charge and their intention of pushing the price of the coin closer to its all-time high of $64,900 was visible.

An important cause of this move is the possibility of a Bitcoin exchange-traded fund (ETF) being approved by the US SEC most probably next week. This discussion on crypto Twitter caused the asset to move from an intraday low of $54,103 on October 13th to rally up to a high of $58,532 on the very next day. There also has been a huge inflow of institutional investment to the BTC product. The accumulation mode for the asset came back with a signal suggesting that the amount of BTC held in wallets of all sizes has increased manyfold since the dip in mid-June.
Bitcoin is witnessing a massive rally as the prices have surged almost by 46% from $40,750 to $59,674 in just eighteen days. Bulls are making it large as the prices are approaching the psychological level of $60k. The asset can face resistance at the crucial level of $60,000. If the bulls manage to push the price above the resistance with good volumes then we can expect the asset to further rally and test the all-time high of $64,899.

Ethereum (ETH) Technical Analysis and Chart:
At the time of writing, Ether is trading around $3,816 reflecting a gain of about 4.55% approximately over the period of 24-hours.

Last week, Ethereum (ETH) was pretty range-bound, fluctuating between $3,400-$3,650. This week it gave a breakout on the upper side and currently trades at $3816. It was reported that approximately 500,000 ETH (~USD 1.5bn) in fees have been burned. The burning phenomenon came about with the EIP-1559 upgrade which tends to make ETH more deflationary, which is why over the longer term, this could benefit the asset. Eth fell sharply on 10th october but bulls continued to buy in the dips and it recovered the very next day. This is a positive sign which shows that market sentiment for the asset is strong and bullish and traders are buying at a dip. ETH has shown a good inflow of volume which has swelled by almost 20% since last week. The asset has captured a $3800 level and the derivatives bulls are in a good position for today’s $385 million option expiry.

ETH, post giving a breakout above the ‘Ascending Triangle’ rallied up to $3,675 and started consolidating. The asset was facing stiff resistance but finally, the bulls were able to breach the level yesterday and the prices made a weekly high of $3,859. The asset may face some resistance at the psychological level of $4,000. Once ETH breaks or closes above the $4k mark then we may expect the asset to test the previous top of $4,373.

At the time of writing, BNB is trading around $466 reflecting a loss of about 1.01% approximately over the period of 24-hours.

Binance coin (BNB) is an in-house utility token of the world’s largest exchange Binance. This week the asset fared well and rallied around 12%. This rally is mostly caused by the 1 billion USD fund for the development of DApps projects on the Binance smart chain (BSC). There was also a visual of increased demand for BNB on the wallets, resulting in BNB whales accumulating approximately 412k BNB in recent times. This move manifests that large investors are still bullish on the token despite the regulations cracking down. The BNB burn protocol event is also acting as a fascinating catalyst due to which the bulls hold to their position in response to the event. The asset held good momentum with about a 41% increase in the trading volume and at the current level with bulls in charge the asset is attracting new audiences.

BNB, post taking support at $330 started its upward journey and rallied almost by 46%. The asset faced stiff resistance around $450 but this week, it gave a breakout and made the weekly high of $482.8. Technically, BNB has made a ‘Spinning TOP’ candle which indicates indecisiveness on the part of bulls to continue its juggernaut for the moment. This indecision can signal more sideways movement or a possible reversal. To further rally the asset must break or close above the recent high of $482.8.

At the time of writing, USDT-INR is trading around $77.80 reflecting a loss of about 0.75% approximately over the period of 24-hours.

The pair is operating with a ~4% premium, compared to its traditional counterpart. This is in line with what the Indian market traditionally witnesses. Crypto markets have been in the green most of this week, after consolidating last week, before giving a breakout impressively. This is probably the reason why we have seen USDT/INR pair premiums higher at first, as markets dipped significantly. Then to participate in the uptrend, traders and investors buy-in, demand for the assets rise, in exchange for USDT, which in turn tends to wash out premiums. The pair has been in a range and has corrected almost by 1.5% from its weekly high of 79. The USDT is consolidating and trading in a broad range from 76.75 to 79.

The overall sentiment in the crypto space remains positive, but at the same time, investors remain cautious. We expect USDT/INR to be range-bound, most likely between $76 and $78. However, given the volatility of crypto markets, over the past few weeks, we remain cautious on what might be next for the pair.

The US Securities and Exchange commission is said to have approved the first Bitcoin futures exchange traded funds in the country and it would be available for trading next week onwards.
MintGreen announced that with the help of its “digital boilers” which apparently can recover around 96% of the electricity consumed for BTC Mining would be recovered and will be used to provide heat to 100 residential and commercial buildings in the North Vancouver city of canada.
The Mexican president in a press conference announced that it would not adopt Bitcoin as legal tender unlike its neighbour country El Salvador and continue to maintain orthodoxy in the finance sector.
Auror, an Ethereum Virtual Machine created to scale DApps built upon the Near Protocol has recently joined hands with Etherscan to offer its native user blockchain statistics and have announced a $12 million debut funding round.
Polkadot has finally released a schedule for the debut of its parachain whose acuticon to said to begin on november 11th and will run till december 9th as approved by the unanimous  council members of the network’s on chain governance.
A major international Venezuelan  Airport is soon going to accept BTC as a payment for tickets and other services.
Morgan Stanely CEO has shown support for the cryptocurrency and Bitcoin giving out a positive statement that it is being closely watched, respected and hopefully the regulation will produce some good result along with a promising future where it exists and not fading away.

Disclaimer: This report is not intended to be relied upon as advice to investors or potential investors and does not take into account the investment objectives, financial situation or needs of any investor. All investors should consider such factors in consultation with a professional advisor of their choosing when deciding if an investment is appropriate. The Company has prepared this report based on information available to it, including information derived from public sources that have not been independently verified. No representation or warranty, express or implied, is provided in relation to the fairness, accuracy, correctness, completeness or reliability of the information, opinions or conclusions expressed herein. This report is preliminary and subject to change; the Company undertakes no obligation to update or revise the reports to reflect events or circumstances that arise after the date made or to reflect the occurrence of unanticipated events. Trading & Investments in cryptocurrencies viz. Bitcoin, Bitcoin Cash, Ethereum etc.are very speculative and are subject to market risks. The analysis by the Author is for informational purposes only and should not be treated as investment advice.