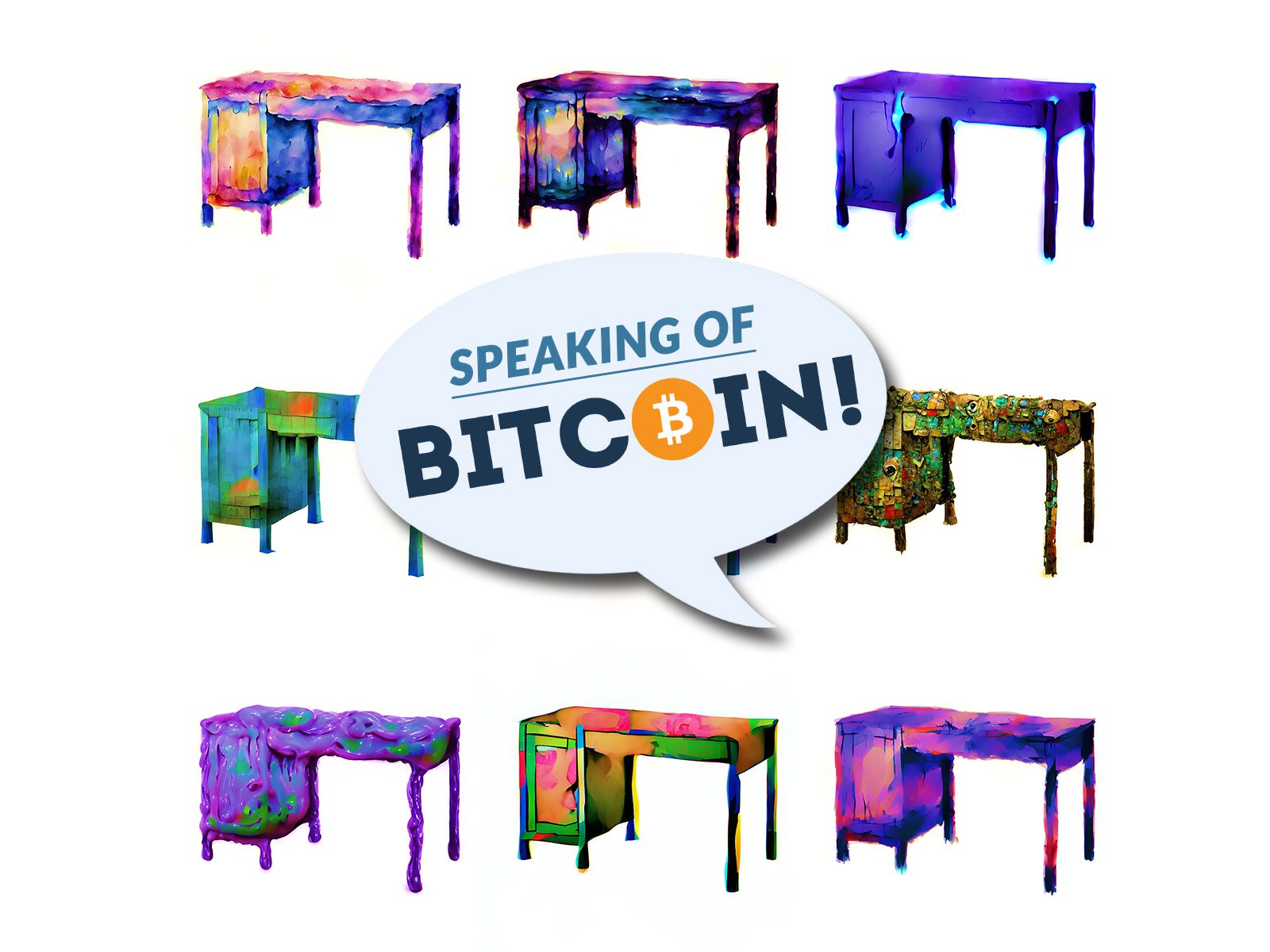 The Endowment Effect, HODLing and the Impossible Self-Appraisal

This episode is sponsored by Nexo.io.

This time on Speaking of Bitcoin, correspondent George Frankly shares another surprising look at glitches in human behavior and what we can learn from them.

In this episode we explore the endowment effect, the phenomenon of collectible cryptocurrency wallets and more.

Hello there- I’m George Frankly and I’m going to take a look at how even the best and brightest people can make truly stupid decisions and terrible predictions- and what we can learn from them. This is Dare to be Stupid.

This time on Dare to be Stupid: The Impossible Self-Appraisal, or “From Hemnes to Hodl”

A little while back, radio pundit and hobbyist twitter self-owner Jesse Kelly bemoaned the softness of modern men. “Can’t believe there are men out there who don’t know how to work with their hands!” he tweeted. “I woke up this morning and built a shed for the backyard.”

A firm stand for principles of traditional masculinity or whatever. At least, as firm and masculine as a phonebooth-sized plastic snap-together rubbermaid storage bin could be. Before he quietly deleted the tweet and photo and shuffled away, multiple commenters were happy to point out that his 6-square-foot Suncast-brand plastic tool shed was available for a cool two hundo at Home Depot and boasts “easy assembly in minutes.”

But let’s not chuckle too smugly at one person’s performative manliness, because there but for the grace of God go all of us. Every human being shares the delusions of inflated self-appraisals of value and utility… though perhaps some of us more than others. When we do something with our OWN HANDS, as this paragon of testosterone did, we will almost always value the results… a bit too highly.

Assessing value is vital to not just trade or business, but to every kind of decision-making. Whether we’re putting old furniture on craigslist or deciding between two life-changing job opportunities, we’re appraising values and weighing them against others. It won’t surprise anybody to hear that the average person can’t perform flawless mental risk-assessment, but it may surprise you how reliably we all sabotage our appraisals in the same ways. From our secondhand IKEA furniture to our long-game crypto wallets, the mental meter of worth and importance is tied to some universal human malfunctions.

Even money, no matter how far we distill it to a pure, perfectly-fungible exchange medium, sprouts human traits when it passes through human hands. You don’t have to be a meticulous numismatist to notice that old and misprinted coins become more than just their fiat value. Even when money sheds its corporeal form and ascends to the spirit world of cryptocurrency, traces of infungibility still remain. A bitcoin is a bitcoin is a bitcoin, but the movements of values create differences. Even when cryptocoins are unserialized and stripped of individual delineation, their destinations themselves have become more than the sum of their parts.

Wallet addresses themselves are commoditized beyond their explicit asset value. Mintings of casascius coins, physical bitcoins, featured public addresses on the forefront and private keys embedded under a tamper seal. The disclosure of all of the public addresses means that anyone can track the contents of all physical coin wallets freely, but so long as the coin is untampered it can be a hand-swappable unit of cryptocurrency- literally trading an entire wallet with the cash inside it. Those physical coins are now collectibles in two completely different contexts: the untampered coins with their crypto value and collectible markup, and then the wide secondary market of tampered coins as curios. They are literally compromised wallets- the private key is known by any previous holders. It’s a hollow coin with no safe utility- but they are still numbered and limited pieces of crypto history, and retain an inexplicable collectible value.

Context will always be key- that context could be the universal baggage of unmoved coins under scrutiny or the personal curiosity of keys to an empty kingdom. The nature of crypto is to preserve the ledger, the history of every movement, and I can’t think of a better way to define “history” than “context and baggage.”

Let’s back up and talk about that IKEA furniture. At this very moment I am blessed with a new house and burdened with an IKEA Hemnes Secretary Desk with Matching Hutch. There’s no spot for the latter within the former. It’s time to put it up for sale. The thing is tall. It is heavy. Other people are asking about two hundred for similar pieces. But ours is in great shape. I installed extra shelves, some coat hooks along the top, and made cutouts in the back for cables and outlets.

My wife listed it for one hundred fifty. Excuse me?

“I have to disclose the crap you attached to it and the bits you cut out,” she says, taking photos of my handiwork for the listing. “I want it to actually sell.”

And damn it, she’s right. Nobody is going to care about the time I spent lugging the flatpacks in, putting it all together, realizing the hutch was sold separately and buying that, realizing it would block the outlet and require a cutout, adding an extra shelf without looking tacked on, and finding hooks that matched the color and knobs well enough to blend in.

To any other person on the internet, my Hemnes Secretary Desk with Matching Hutch looks like every other Hemnes Secretary Desk with Matching Hutch for sale, except with some crap bolted to it. My sense of effort is meaningless against the nearly identical effort every other one of them required at one point or another. It only seems important, improved, or impressive… to me.

Mercifully, I’m not alone. The results of a truly strange set of social experiments in 2011 by combined researchers from Harvard, Yale, and Duke outlined what the authors dubbed “The IKEA Effect.” Also known to boring people as the “endowment effect,” this was a behavior that arose when test subjects were asked to construct various instructed projects, from LEGO to origami to, yes, IKEA furniture. Once complete, the majority of subjects appraised the value of their creations on par with those of experts and professionals. Many saw their constructed IKEA furniture and storage bins as worth significantly more than the given retail price of the unassembled merchandise. They did not see the same objects as similarly valuable when they were put together by someone else.

The fact is that, while labor and effort will always be sources of value, we have overwhelming biases towards OUR efforts and OUR labors. The investment of our time and sense of control over the construction of these products provides them with emotional endowment that is tragically non-liquid and non-fungible.

Stranger still, this added cost can be used against us. The “IKEA effect” allows us to be sold “experiences” at an upcharge, using our required labor as a value-add. The researchers were happy to point out this role reversal through the existence of Build-a-Bear Workshop, a place where kids can do all the labor of assembling and stuffing a plush animal for four times the price of a pre-assembled one. I can only imagine the pain these noble economists must have felt years later when building their own lightsabers at Disneyworld.

If it feels like these are backwards, unintuitive habits, well, I’m sorry but it gets worse. There’s signs of correlation between Endowment Effect judgements and the Dunning-Kruger Effect. That is the cognitive bias in which the less expertise a person has in a subject, the more they overestimate their skills with it. It’s the inevitable end point of “how hard could it really be?” The more inexperienced an amateur is at a new task or craft, the greater the risk of them grossly overvaluing their output. For example, a person with, say, no experience building things with their hands might think that assembling a snap-together plastic storage shed is a momentous triumph worth sharing with the world.

These are all widgets and doodads, though- the sort of things with nebulous, qualitative values. When you try to get into the real economics of it, the way we handle objectively measurable assets is somehow just as bad.

Somehow, when given choices of quantitatively equal value, the human brain still defaults to an emotional bias- specifically, we will tend to overvalue the assets we already own more highly than potential gains of equal value. This is particularly evident in collector’s markets, where a prized asset- the thousand dollar rookie card, the ten thousand dollar vintage wine- simply cannot be parted with for the known, established values. The satisfaction and security of owning the asset is worth more than the equivalent cash.

This has even been experimentally shown on the micro scale by the economist John List, with research volunteers assigned random five dollar gifts at the beginning of events and then given the opportunity to trade out at the end. Among typical attendees, four out of five declined to even consider. Yet, among volunteers experienced in commodities trading, that rate climbed to almost fifty-fifty. Clearly, unless people have trained themselves to depersonalize assets, they will find themselves attached to them.

The struggles of the everyday crypto hodler provide some insight into this conflict. On one hand, you can explain away some of this behavior through the classic rules of opportunity cost: when you sell, you’re sacrificing potential future gains.

But it’s rarely just that- it’s the fact that you’re dropping out of the fight. You’re quitting the game, you’re tearing up your ticket for the money train. No amount of cash in hand will ever fully quantify the loss of your stake in the journey. Some people have desensitized themselves to that hidden cost, but many of us still find it hard to shake.

This isn’t an indictment of emotional decisions, nor is it highlighting the chumps we all deserve to laugh at. The depth and degree of these biases will vary, but we all share them. It’s the cost of being human, and, surprisingly, it’s not a weakness.

There is a connective thread behind many of these habits that hasn’t always been clear- it’s a tough thing to measure, but it goes something like this;

Which is the stronger feeling? The satisfaction you would get from gaining a $5000 raise, or the frustration at taking a $5000 pay cut? When faced with objectively equal utility value at stake, are the emotional stakes also equal?

For the majority of human beings, they simply aren’t. The discomfort of loss is consistently greater than the pleasure of an equal gain. The human brain is *inherently loss-averse.* Our biology is trained to be cautious, to gather resources, to value our time, and to take our losses even more personally than our gains.

It’s not something to be ashamed of: take pride in your triumphs, be mindful of failures, and enjoy the ride. Just be sure to step outside your own shoes from time to time; you’ll be a better negotiator, a better person, and all around less likely to hold a playskool toy shed over your head and declare yourself He-man.

Thanks for listening. As always I’d like to remind you that all my job titles come with the word “armchair”. If you’re an expert and I’m getting it wrong, I’d like to hear from you.