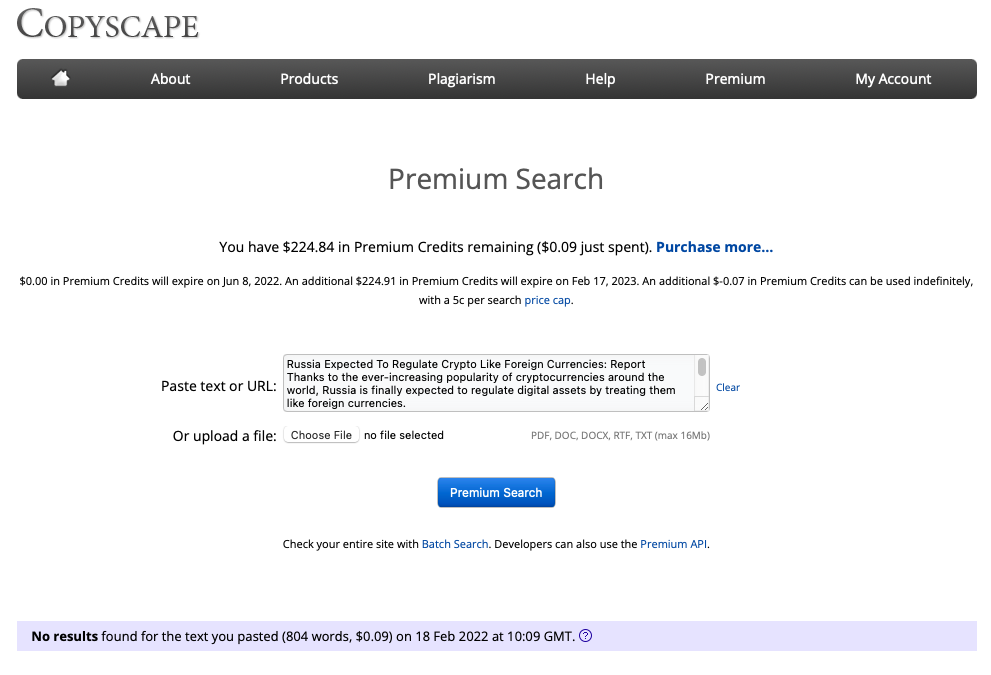 Thanks to the ever-increasing popularity of cryptocurrencies worldwide, Russia is finally expected to regulate digital assets by treating them like foreign currencies.

Based on a document published on February 8, 2022, on the official website of the Russian Government, the country is expected to introduce a draft law by February 18. The document states that the circulation of digital financial assets would be regulated by the state. It also asked all “participants in the professional market” to strictly oblige with the regulations drafted with the intention of “protecting the rights of ordinary investors”.

Moreover, the document outlines bringing cryptocurrencies under the same umbrella as foreign currencies after the regulation. However, the government would make this happen by the second half of 2022 or the first half of 2023.

Interestingly, this announcement was made one week after the Bank of Russia proposed a complete ban on the use of cryptocurrencies and other related digital assets. The finance ministry opposed banning digital assets due to the country’s high popularity and adoption of crypto.

According to the new Russian Government regulations, it has been suggested that all crypto purchases made within the country be conducted via locally registered and licensed companies only. The State would not allow any crypto transaction without complete user identification. This decision is likely to have been taken by the government to keep a check on the speculative nature of crypto purchases.

With this decision, the Russian Government would allow banks to act as intermediaries between different users whenever crypto transactions transpire. It acknowledges cryptocurrencies similar to digitized banking transactions.

Moreover, the new cryptocurrency regulations in Russia would require all peer-to-peer marketplaces and crypto exchanges registered as legal entities in Russia. This rule provides the government with greater control to check the crypto transactions across the country. The regulations would also require people to open accounts with authorized banks in the country and fulfil all requirements applied to conventional financial institutions.

The cryptocurrency regulations in Russia would require foreign crypto exchanges to be set up in the country to keep a check on fraudulent and illegal transactions. Local and foreign companies dealing in digital assets would be obliged to track user data related to crypto transactions and keep a record of the same for at least five years.

If these regulations are passed on the stipulated date, all cryptocurrency transactions exceeding 600,000 rubles (₹6,00,000) would need to be declared with the FNS (Federal Taxation Service). Any failure in making this declaration would be treated as a criminal offence.

In a remarkable move, the Russian Government has suggested that the banks working with crypto exchanges would not be able to use dedicated blockchain analytics tools provided by prominent organizations like Elliptic, Chainalysis, and more. Instead, the banks would be obliged to use the tracking tools developed by Rosfinmonitoring, the Federal Financial Monitoring Service of Russia. According to the government’s official document, this tool is named “Transparent Blockchain”.

Transparent Blockchain would allow authorities to identify the owners of crypto wallets used within the country. The tool would also collect data from the darknet to identify unethical and illegal use of digital assets.

The above is an overview of how Russia plans to regulate cryptocurrency. While the government has acknowledged the use of digital assets, it has exercised a good amount of control over the same. While Russians may be able to use crypto officially, the practice would be possible only in the legal sector. The new crypto regulations would make cryptocurrency transactions very similar to digital transactions carried out using conventional online platforms.

Interestingly, the announcement of crypto regulations in Russia came not too long after India acknowledged the use of digital assets. However, Russia’s control over the buying, selling, and trading of crypto is higher than that of the Indian Government. It is safe to say that the trend is here to stay, looking at different countries worldwide giving importance to crypto and other digital assets.

From being considered an unsuitable investment to getting outright banned and finally getting official recognition by governments, cryptocurrencies have had a fascinating journey in most countries.