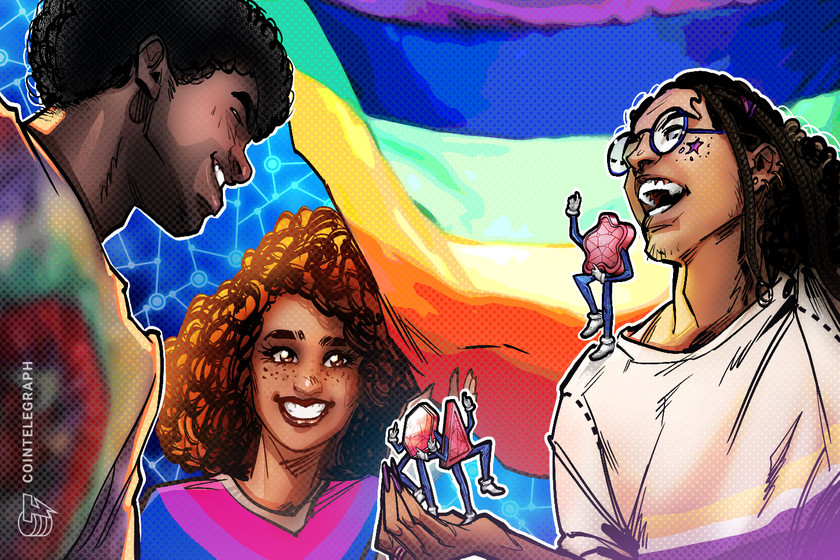 The Metaverse and NFTs are allowing people across the world to celebrate Pride Month in various ways.

A number of social gatherings have started to take place in the Metaverse as companies across the globe begin to understand the value that virtual interactive environments can have for consumers. It shouldn’t come as a surprise then that Pride Month — a month-long celebration held in June to commemorate the 1969 Stonewall Riots — will be celebrated in various metaverse environments this year.

Akbar Hamid, co-founder of People of Crypto Lab (POC) — an innovation hub dedicated to increasing diversity and representation in Web3 — told Cointelegraph that the Metaverse is an incredible way to allow people around the world to partake in events they may not be allowed to participate in otherwise. “We want Pride Month 2022 to be an event anyone can join, even in countries where people are not allowed to participate,” he said.

Although Pride Month is celebrated openly in many places, 71 countries ​​currently criminalize being LGBTQ+. In order to push against this, Hamid explained that POC has collaborated with The Sandbox — a blockchain-based metaverse project — to launch a virtual diversity, equity and inclusivity hub during Pride Month. Known as Valley of Belonging, this unique youth center will enable people across the world to celebrate, said Hamid:

“Marginalized communities tend to be left behind, so POC’s goal with Valley of Belonging is to ensure that each community has access to events they can openly participate in. And given the current climate of rising discrimination against LGBTQIA+ and other minorities, there has never been a more important time to build a safe space that welcomes all.”

In order to achieve the goal of “belonging,” Simone Berry, co-founder of POC Lab, told Cointelegraph that Valley of Belonging will consist of 8,430 nonfungible token (NFTs) avatars that represent different ethnic, gender and sexual identities. “All of our avatars are non-binary, meaning they don’t identify with any gender or sexual orientation. This is also the first NFT project in The Sandbox that allows users to customize avatars using pronouns,” explained Berry. She added that avatar traits will consist of over 36 different skin shades while incorporating features that celebrate differences like prosthetic limbs, along with cultural identifiers like a hijab.

Berry also noted that NYX Professional Makeup — a subsidiary of L’Oreal — will integrate into The Sandbox to feature voxelized makeup looks, which will further help drive adoption. “In order to demonstrate that makeup is genderless, all of the avatars in our mint, which will take place June 17, will feature makeup from NYX,” she said. Yasmin Dastmalchi, general manager of NYX Professional Makeup, told Cointelegraph that the partnership with POC and The Sandbox is important since it allows diverse communities a forum for true self-expression, noting that the Metaverse “has become a form of digital identity.”

Decentraland will also allow users to openly celebrate Pride Month 2022 in its blockchain-based Metaverse with a month-long event featuring entertainment, experiences and curated content. Iara Dias, head of Metaverse Pride and senior producer at Decentraland, told Cointelegraph that Metapride Land is debuting its headquarters in Decentraland to celebrate Metaverse Pride:

“This will offer a permanent safe space for the global LGBTQIA+ community to engage and meet other members around the world. Users will be able to access the space year-round, not just during Pride Month, further ensuring Decentraland and its partners’ commitment to supporting the LGBTQIA+ community.”

Dias added that Decentraland will host Metaverse Pride on June 11, which is a celebration honoring the LGBTQIA+ community. She elaborated:

“Debuting during Pride, the long-awaited ‘kissing’ emote will allow avatars to kiss each other and express their feelings towards one another. Furthermore, couples from all sexual orientations can get married in the metaverse and receive NFT certificates of their union.”

According to Dias, these features present a unique opportunity for same-sex couples who reside in countries in which they are not allowed to express their commitment. “There will also be drag queens presenting for the first time in the Metaverse, along with a special vogueing-capoeira performer that marks the first time this type of dance and presentation have entered the Metaverse,” she commented.

How safe is the Metaverse?

While it’s notable that both The Sandbox and Decentraland will host Pride events this year to ensure new opportunities and access, it’s important to point out that safety and security are still ongoing challenges in the Metaverse.

Online communities like gaming chat rooms are notorious for hate speech against racial and sexual minorities. Indeed, budding metaverse communities have been shown to be hotbeds for racism, bigotry and misogyny.

One researcher who recently entered Meta’s social-networking platform Horizon World using an Oculus virtual-reality headset announced that her avatar was raped in the virtual space.

Recent: Crypto knocking on the WEF’s door: The view from Davos

Given these concerns, Sebastien Borget, co-founder and chief operating office of The Sandbox, told Cointelegraph that the platform is taking security very seriously as more events are hosted virtually. “Education on security in The Sandbox is critical to onboarding the next billion users to the Metaverse,” he said. Borget added that The Sandbox’s recent partnership with hardware wallet Ledger will help promote security in the Metaverse.

Given that Decentraland is also a blockchain-based platform, Dias pointed out that users’ data and privacy protection are paramount. “The only user identifications on Decentraland are usernames and wallet addresses. This allows users who wish to remain anonymous the ability to fully express themselves without the fear of being identified,” she said.

In regard to appropriate behavior, Dias mentioned that Metaverse Pride has laid out behavioral guidelines, allowing users to block others if they experience harassment. “We’ll use non-player characters to offer guidance on how to do this, but we have also made this very user-friendly.”

Challenges aside, Web3 as a whole is allowing Pride Month to extend far beyond what has previously been possible. Shedding light on this, Dias commented that compared with real-life Pride events, the Metaverse enables people around the world — even in dangerous places — to participate. In addition, she said that a person’s digital identity defined via an avatar can give users the courage to be whoever they wish. “I wouldn’t be surprised to hear stories of people saying their avatar helped them to be brave, and finally come out and be their authentic self.”

A number of artwork NFTs are also being launched to celebrate and raise awareness for Pride Month. For example, Serge Gay Jr. and Dan Nicoletta, both photographers and close friends of Harvey Milk — an American politician and the first openly gay man to be elected to public office in California — recently launched a limited edition NFT art series inspired by Milk’s legacy.

Nicoletta told Cointelegraph that the goal behind “The Friends of Harvey Milk Plaza” NFT collection is to foster support for LGBTQ+ civil rights and within the emerging NFT art market: “I’m not seeing a lot of LGBTQ+ content in that realm yet, so I am excited about the possibilities and to be working in that medium for the first time.”

Recent: Anonymous culture in crypto may be losing its relevance

“The goal of The Friends of Harvey Milk Plaza NFT Collection is to raise awareness around The Memorial at Harvey Milk Plaza project in San Francisco, and to inspire other cities to build similar spaces in their own communities,” he said.

Gur shared that he grew up with a gay father who hid his true identity for years. As such, he explained that the biggest goal behind Pride Icons is to put a spotlight on the LGBTQ+ community while making blockchain accessible to those who may not be aware of the benefits associated with the technology: “This is really about education — we need to educate people of all backgrounds on the power of Web3 and NFTs.”