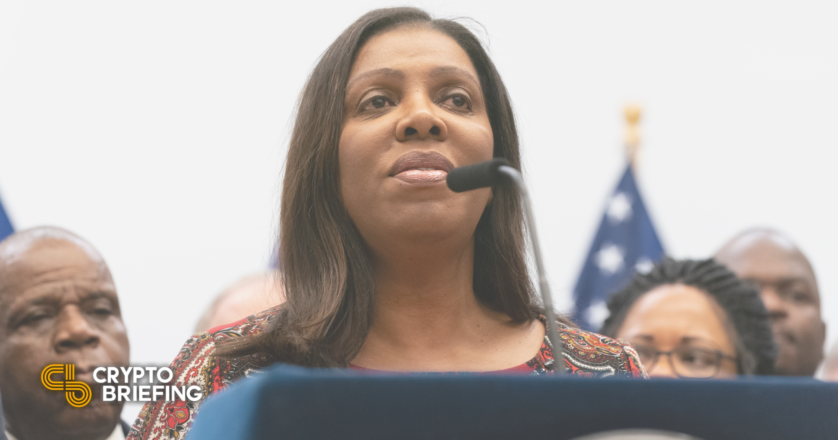 The Attorney General of New York State has banned two crypto lending companies from operating within the state, and has sent letters to three additional entities requesting more information regarding their business practices.
New York AG Letitia James contends that crypto lending products are securities, and therefore must be registered as such.
This is not the first time the NY AG has taken decisive action against cryptocurrency-related entities.

New York Attorney General Letitia James announced today that two “unregistered crypto lending platforms” must cease operations within New York State. The names of the two firms had been redacted from the publically-released letters, but early images of the letters appeared to contain “Nexo” and “Celsius” in their file names.

The Office of New York Attorney General Letitia James announced in a press release today that it had sent cease-and-desist letters to two unnamed cryptocurrency companies ordering them to cease operations in New York State. Furthermore, the AG sent letters to three additional entities requesting information on their activities and products.  Although the names of the entities were redacted, early images of the cease-and-desist letter and information request letter appeared to reveal the file names “Nexo Letter” and “Celsius Letter,” respectively.

According to the press release, the AG alleges that crypto lending products that allow investors to earn a yield on their assets should be considered securities; therefore, these entities must register with the Office of the Attorney General (OAG) in order to lawfully conduct business in New York State.

Since the Attorney General made these announcements, Nexo has refuted the basis of the AG’s orders. Nexo told Crypto Briefing:

“Nexo is not offering its Earn Product and Exchange in New York, so it makes little sense to be receiving a C&D for something we are not offering in NY anyway. But we will engage with the NY AG as this is a clear case of mixing up the letter’s recipients. We use IP-based geoblocking.”

Section 1.2 in Nexo’s Exchange Terms lays out that Nexo’s exchange services are not available if one is “a citizen or resident of Bulgaria, Estonia, Australia, [or] the State of New York.”

Neither Celsius nor the Investor Protection Bureau of the OAG could be reached for comment.

Signs of impending regulation—or even legal action—have circulated around the crypto industry in New York for some time. In 2018, then New York AG Barbara D. Underwood issued a warning of “significant risks” to “customers of virtual asset trading platforms.” In today’s announcement, James said:

“Cryptocurrency platforms must follow the law, just like everyone else… We’ve already taken action against a number of crypto platforms and coins that engaged in fraud or that illegally operated in New York.”

In February, the OAG reached a settlement with iFinex, Bitfinex, and Tether—all affiliated entities—requiring the companies to cease all trading activities in New York and to pay an $18.5 million fine. In March, the OAG notified those dealing in the virtual currencies industry that they must register with the Investor Protection Bureau. Further, James shut down the crypto trading platform Coinseed, Inc. last month on the same day that she helped secure the recovery of $479.9 million in settlement claims from companies that “unlawfully sold stocks and two digital instruments promoted as cryptocurrencies without registering in New York State.” Consistent with the theme of today’s announcement, James said, “No company is above the law.”

Notably, Tether Limited appears unredacted in the AG’s information request letter to the three unnamed entities. Section 5 reads: “State whether you and/or your lending product solicits, accepts, loans, or accepts as collateral, tethers (USDT), and provide details regarding the use of USDT in connection with your product.”  It goes on to ask for details regarding all contracts and agreements with Tether Limited (and its affiliated persons and entities), as well as details on all loans, collateral, and transactions using USDT.

Tether has been under increasing scrutiny from a variety of regulators in recent months. Among other incidents, Tether has been subject to fines by the CFTC and has been accused by the AG of not fully backing its flagship stablecoin, USDT, with U.S. fiat currency, as it has claimed.

In today’s announcement, James cited New York’s Martin Act, which grants the AG broad powers to investigate and prosecute securities fraud within the state. The Martin Act’s definition of securities includes traditional instruments such as stocks and bonds, but courts have held that the Act’s provisions can be interpreted broadly, as the defined categories in the Act are non-exhaustive. Today’s announcement appears to affirm that the OAG considers certain virtual currency lending products to be securities under the Martin Act, and it appears to be signalling that it is prepared to act as such.

Disclaimer: At the time of writing, the author of this piece owned BTC, ETH, and several other cryptocurrencies.