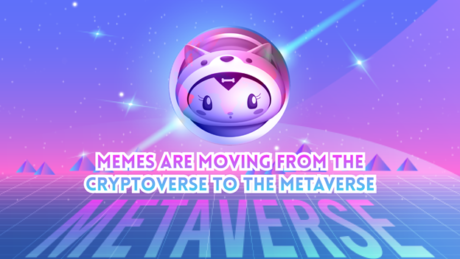 Memes are Moving from the Cryptoverse to the Metaverse

Decentralization, at its core, is and has always been a community-driven revolution in money and culture, and cryptocurrency has served as a key player in the movement. After the advent of cryptocurrency, Dogecoin came in as a meme coin purely to mock investors who bought crypto despite a lack of understanding of the concept. Ironically, Dogecoin grew to become one of the most valuable coins in terms of market capitalization.

Once Dogecoin emerged as a trend it rapidly spread into popular culture and with its widespread success, several tokens based on dog breeds were been created, including Shiba Inu, Baby Shiba Inu, and Floki Inu – named after Elon Musk’s pet.

Dogecoin is now being accepted as a form of payment at Coinbase Commerce, paving the way to conventional utility, and with the Metaverse growing and evolving, users can already use several cryptocurrencies, including meme coins as payment in various ecosystems. With the power of artificial intelligence meme coins have finally come to life.

A relative newcomer in the space Kitty Inu ($KITTY) splashed onto the scene with a Fair Launch on October 24, 2021. Capitalizing on the dog-themed coin craze, the adorable Kitty Inu meme is of a cat disguised in a dog costume, seemingly so she can run with the big dogs. The female-led team behind Kitty Inu is comprised of experienced industry professionals, who have wasted no time laying out their vision and embarking on some seriously ambitious projects, especially given the current microcap status of the project.

The $kitty token will be the native currency of an NFT based Free-to-Play and Play-to-Earn racing game, KittyKart, being built on the Ethereum blockchain where players race karts to “mine” NFT assets.  Through continued gameplay, mined NFT assets will then confer either skillset advantages or enhancements to visual appearance.  Assets will have the ability to be “mined” (earned) through gameplay or bought and sold on the secondary market via the in-game marketplace. From the preview trailer on the Kitty Inu website, it appears KittyKart will be colorful, serious, and fun, having been inspired by the likes of past favorites such as Mario Kart and Crash Bandicoot.  Further broadening the game’s appeal, Team Kitty has been acquiring popular NFTs, the likes of a Bored Ape, a Deadfellaz, and Rumblekong to name a few, for use to populate the game with characters that will be inclusive of the larger community. The beta release of Kitty Kart is expected around the end of January or early February of 2022.

Kitty Inu is also engaged in a partnership with The Culture Dao ($CULTUR) a decentralized Web3 Pixar and Virtual Beings Development Guild founded by Emmy award winner Edward Saatchi (founder of Fable Studios and co-founder of Oculus VR story studio) and blockchain developer Anna Nevison, M.S. to assist in the development of an Artificially Intelligent Kitty Virtual Being.  AI Kitty would tap into an array of data from sources such as news & world events, cities, communities, social media, facial analysis, and Google trends to teach her to feel.  The intent is that AI Kitty would empathize on multiple scales, gathering data from the communities that adopt her and once perfected in the metaverse, she would find a place in IRL public spaces.

Furthering the use-case of their token, Team Kitty Inu also recently partnered with Shopping.io where non-us holders can use their Kitty Tokens to shop at major retailers online.  They have also have retained the outside legal counsel of the international law firm of Squire Patton Boggs to aid in the development of their business enterprise.  Furthermore, Kitty Inu is Certik audited and the Lead Developer is KYC Verified by InterFi Network.

Kitty Inu ($kitty) is currently available for trade on Uniswap and Pancakeswap.