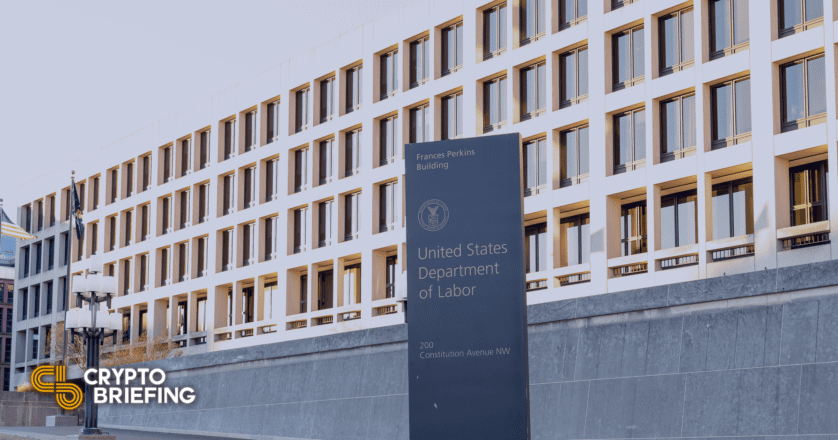 Despite the Labor Department warning in March about Bitcoin in retirement accounts, Fidelity went forward with its plans days ago.

The assistant secretary of the Employee Benefits Security Administration at the U.S. Department of Labor has noted his agency’s major worries with Fidelity permitting Bitcoin in its company-sponsored 401(k) retirement accounts.
Mr. Khawar warned of Bitcoin’s speculative nature and its regulatory risk.
In March, the Labor Department cited volatility, amongst other concerns, as a reason for its trepidation toward Bitcoin being used for retirement savings.

A top official with the the agency in the Labor Department that is tasked with regulating and overseeing companies in their management of employees’ retirement accounts has expressed concerns with Bitcoin’s inclusion in Fidelity’s 401(k) retirement services, which is used by around 23,000 companies. Chief among the cited concerns were Bitcoin’s speculative nature and its corresponding lack of regulatory clarity.

The acting assistant secretary of the Employee Benefits Security Administration, Ali Khawar, has noted his agency’s serious concern with Fidelity allowing its companies to use its 401(k) service to include Bitcoin for their employees’ retirement accounts.

In an interview with The Wall Street Journal, Khawar characterized cryptocurrency as a speculative asset class, in which hype and potentially empty promises about the future run rampant. In contrast, he characterized retirement as a very serious matter:

“For the average American, the need for retirement savings in their old age is significant. We are not talking about millionaires and billionaires that have a ton of other assets to draw down.”

In addition to the perceived speculative risks, Mr. Khawar said that the lack of consumer protections currently afforded to crypto investors also draws into question its suitability as a savings vehicle in a retirement fund.

Assistant secretary Khawar mentioned that he and others from his agency will shed more light on their concerns with folks from Fidelity in an upcoming meeting. Another prominent figure in the Employee Benefits Security Administration cited the fact that, using Fidelity’s services, companies could permit employees to take up to a 20% weighting in Bitcoin.

Despite the Labor Departments March guidance, in which it expressed concerns over Bitcoin’s inclusion in retirement plans due to its volatility, custody risks, regulatory risks, valuation risks, and more, Fidelity announced on Apr. 26 that it would permit companies using its 401(k) retirement services to let employees take up to a 20% stake in Bitcoin—though employers could still choose not to allow it. 401(k) retirement plans allow for tax-deferred retirement savings, and oftentimes employers will match some portion of their employees’ contributions. In 2020, Fidelity accounted for around one-third of company-sponsored retirement accounts in the U.S. In other words, Fidelity was responsible for approximately $2.4 trillion in 401(k) assets.

Mr. Khawar did receive a one-day notice before Fidelity put forward that its plans to allow the companies that use its 401(k) retirement services to permit Bitcoin’s incorporation.

Fidelity responded to the Labor Department’s concerns, noting the sheer demand growth for digital assets exposure throughout various investor demographics, as well as forecasting a bright future for the asset class.

Disclosure: At the time of writing, the author of this piece owned BTC, ETH, and several other cryptocurrencies.