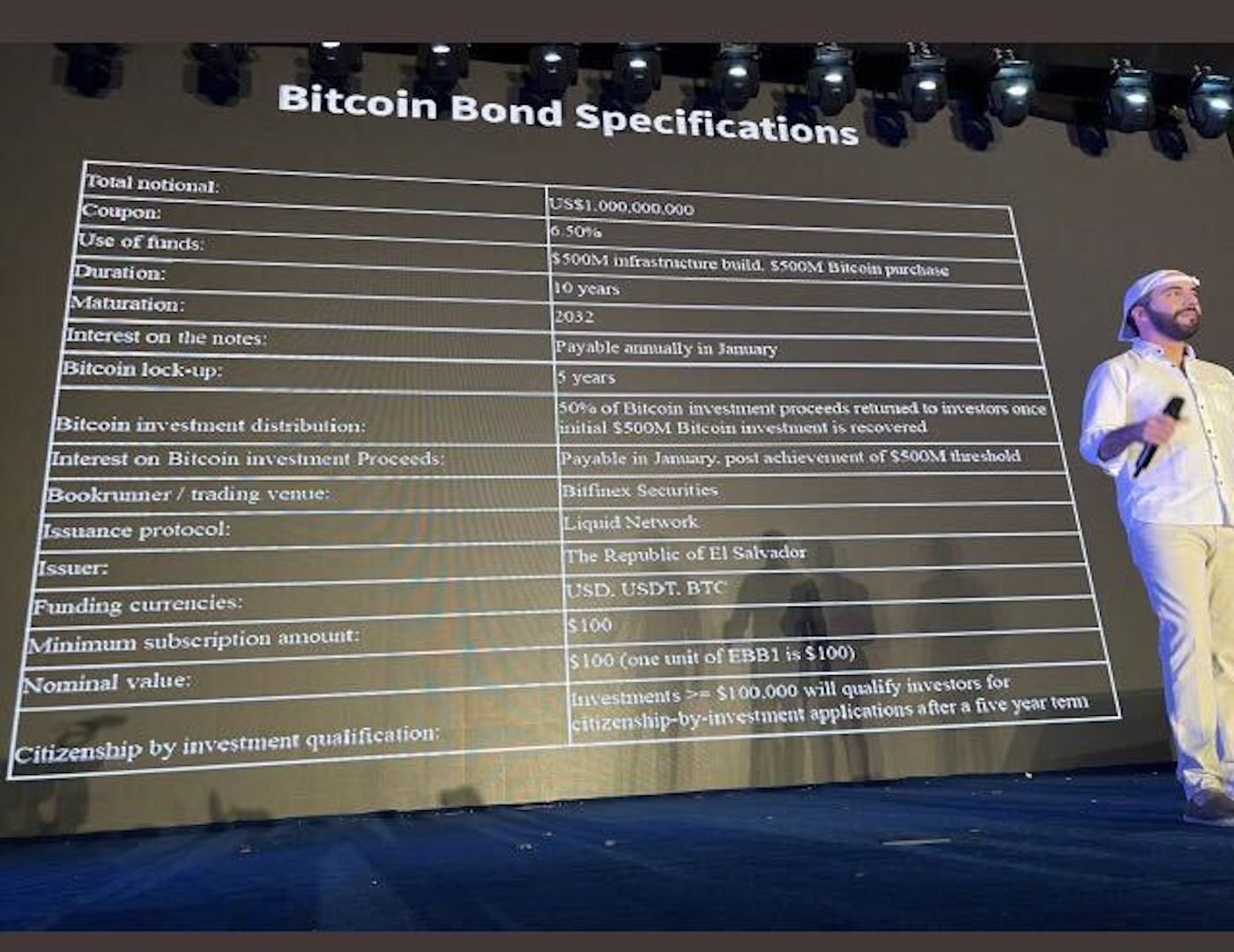 While El Salvador’s new bitcoin-linked bond may be one of the highest-yielding fixed-income instruments globally, it might turn out to be riskier than the country’s outstanding government bonds, which are already categorized as junk-grade.

Some experts said the new offering might struggle to attract investors, especially because the bond appears to pay interest at a lower rate than the country’s conventional dollar-denominated bonds.

El Salvador President Nayib Bukele announced the plans on Saturday to issue a $1 billion “Bitcoin Bond” with a 10-year maturity on the Liquid Network. Half of the money raised will be used to purchase bitcoin, and the rest will fund construction of a new “Bitcoin City” along the Gulf of Fonseca near a volcano.

The bond – developed by Blockstream and processed by Bitfinex – will offer a 6.5% coupon, or the rate of annual interest payments. In addition, investors will receive dividends generated by staggered liquidation of bitcoin holdings, which will begin from the sixth year. The annualized yield back to investors could reach 146% in the 10th year, according to Blockstream projections.

Compare that with the benchmark 10-year yield on El Salvador’s outstanding government bonds, currently around 13%, according to Marc Ostwald, chief economist and global strategist at ADM Investor Services International (ADMISI).

For further context, the U.S. 10-year Treasury, considered by many global authorities and bond investors to have pristine creditworthiness, yields about 1.5%.

Will the bitcoin price go to $1 million?

But the new El Salvador bond’s projected performance is based on Blockstream models suggesting that bitcoin will rally to $1 million in the next five years – an aggressive target given that the cryptocurrency is currently trading around $58,000.

Some investors might be betting that the lockup period – wherein $500 million of bitcoin would be out of circulation – might itself contribute to a fresh bull run.

“Anyone buying this bitcoin-backed bond is betting on the cryptocurrency in a very big way, ignoring the credit market currently signaling that El Salvador is very much facing a distressed-debt situation,” Ostwald told CoinDesk in an email.

Prices for the country’s outstanding government bonds due in 2032 traded above 110 cents on the dollar in April – well above the par value – and have been declining ever since. Recently, they were changing hands below 75 cents on the dollar, providing a very relevant example of just how volatile emerging-market bonds can be.

El Salvador adopted bitcoin as legal tender in June. A month later, Moody’s downgraded the country’s long-term, foreign-currency issuer and senior unsecured ratings to Caa1 from B3, citing the decision to adopt bitcoin as a sign of weak governance. Obligations rated Caa1 are judged to be junk-grade – of poor standing and subject to very high credit risk.

“I suspect that El Salvador bonds are sufficiently risky, and adding bitcoin on top of that precludes most retail investors and more institutional investors,” Marc Chandler, chief market strategist at Bannockburn Global Forex, told CoinDesk in an email.

“That is dangerous because if the plan goes wrong, who will save the day?” Morris said, adding that Blockstream’s million-dollar forecast for bitcoin (BTC) is extremely optimistic.

According to Bannockburn’s Chandler, the country’s new bitcoin bonds appear to be a gimmick to achieve lower interest rates.

Borrowing costs tend to be higher in indebted nations with weak economic growth such as El Salvador, Greece, Sri Lanka and Mozambique. Each of these nations offers a double-digit yield on their benchmark 10-year bond.

However, by allocating half of the proceeds from the debt sale to bitcoin, the El Salvador government is giving investors a share of the cryptocurrency’s possible price upside. That might help explain why investors would be willing to buy the country’s new bitcoin bonds at a lower yield than what they would get from El Salvador’s conventional outstanding bonds.

According to Chandler, “the desperate attempt” could work but would require getting lucky on bitcoin, whose intrinsic value, or lack thereof, continues to be debated. Chandler says that other countries should follow El Salvador’s lead but probably won’t.

“I doubt that as I doubted many corporate treasurers would buy bitcoins as Tesla did,” he said.

Would it be less risky to … just buy bitcoin?

Crypto investors may also think twice before taking the gambit because they likely already have experience buying bitcoin directly.

“While crypto enthusiasts will doubtless be buyers, the simple question is would they rather own the underlying or be happy to take the encumbrance of a clearly distressed sovereign debt, let alone any geological risk of ‘Bitcoin City’ being located next to a volcano,” ADMISI’s Ostwald said. “I guess that brings a whole new meaning to ‘explosive.'”

Laurent Kssis, a crypto exchange-traded fund expert and director of CEC Capital, said the bitcoin-backed bonds might be a good deal for investors who are already motivated to buy emerging market debt – government bonds of Russia, Mexico, India, Brazil and other less-developed nations. The benchmark bonds in these nations yield between 6% to 9%.

However, for more risk-averse crypto traders, holding bitcoin might be a better option – as outlandish as that might sound to some investors used to lower volatility in traditional markets.

“It is safer and may appreciate more than the bond,” Kssis said. “Bear in mind that the bond could/may default and may be classified as junk status so many investors may not be able to invest.”