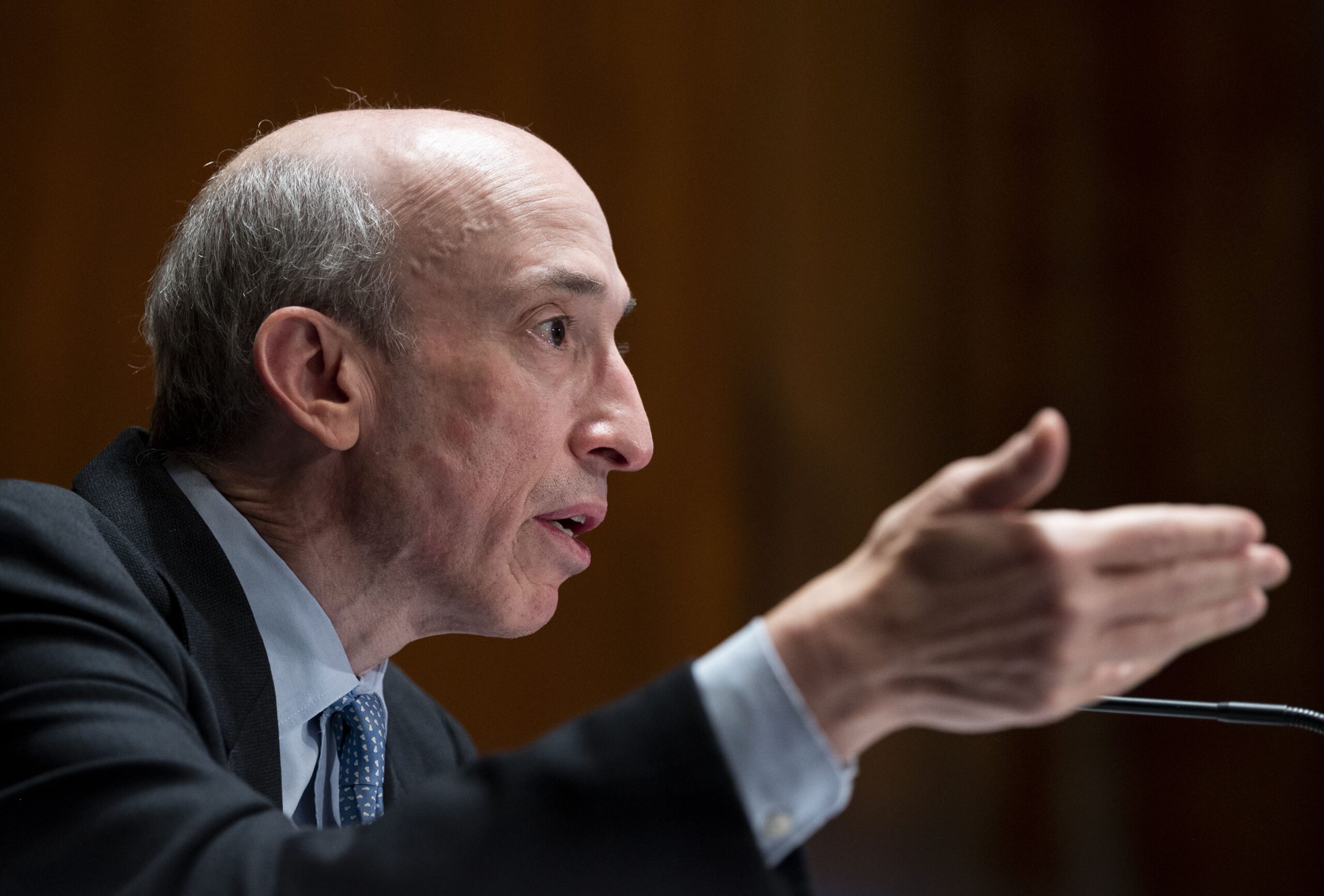 U.S. Securities and Exchange Commission (SEC) Chairman Gary Gensler was on the hot seat on Tuesday during a House Financial Services Committee oversight hearing, and many committee members – 19 of them – took the opportunity to ask Gensler about crypto regulation.

The committee’s focus on crypto revealed the fascination – and pent-up frustration – with the growing crypto industry and the SEC’s role in regulating it.

Rep. Patrick McHenry (R-N.C.), the committee’s top Republican, questioned Gensler about his “concerning and contradictory” statements about crypto regulation and whether the SEC has the authority it needs to regulate crypto.

In May, Gensler told Congress that the SEC would need additional legislation to regulate and define digital assets and exchanges, but McHenry pointed out on Tuesday that in subsequent interviews with the media, Gensler’s position on that has changed: The SEC chairman now posits that the SEC has the authority it needs to regulate crypto under existing legislation.

Gensler told McHenry that Congress could help “fill gaps” in the coordination between the SEC and the Commodity Futures Trading Commission (CFTC).

Despite the seemingly brewing turf war between the CFTC and SEC over crypto regulation, Gensler was clear in his opinion that Congress doesn’t need to create another regulatory body to oversee crypto.

“We don’t need another regulator,” he said. “There are things that can be done to ensure the smoothness between the two agencies … even if Congress doesn’t act.”

Gensler also commented on the SEC’s shrinking budget and reiterated his request that Congress provide additional funding to the SEC so that it can hire more staff and upgrade its data analytics software.

“We’ve shrunk about 4 or 5% in the last four or five years. I would have hoped that we might have grown 4 or 5% at this period of time,” Gensler said. “I know resources are tight, but it would help us to do our mission.”

When asked by McHenry and other committee members whether he considered cryptocurrencies like bitcoin and ether to be securities, Gensler dodged the question. “I’m not going to get into any one token,” Gensler said. “But I think that the securities laws are quite clear. If you’re raising money from somebody else, and the investing public has a reasonable anticipation of profits based on the efforts of others, that fits within the securities law.”

Gensler testified that “most” of the 5,000-6,000 existing cryptocurrencies fall under the definition of a security and are thus subject to regulation by the SEC – a similar position to that of his predecessor Jay Clayton.

Rep. Tom Emmer (R-Minn.), chairman of the Congressional Blockchain Caucus and a vocal supporter of the crypto industry, pushed back against Gensler’s assertion, saying that he considers most cryptos to fall under the definition of a commodity or currency.

Rep. Warren Davidson (R-Ohio), another member of the blockchain caucus, asked Gensler what it would take for cryptocurrencies to go from being securities to being commodities or currencies, referencing 2018 statements in which Gensler said that ether could be “off the hook” from being considered a security because it had switched to a decentralized network.

“You’ve repeatedly said that you believe initial coin offerings (ICOs) are securities,” Davidson said. “Can you clarify when a token is sufficiently decentralized to no longer be a security in your view?”

Gensler refused to comment on ether or any other specific token, instead saying that any token that passed the Howey Test would be considered a security.

Gensler is coming for the exchanges

In response to a question from Rep. Jim Himes (D-Conn.), Gensler discussed his reasoning for focusing on regulating trading and lending platforms, including decentralized ones.

“Investors are basically giving ownership rights up. They transfer what’s called a private key to the platform … and the platforms take custody,” Gensler said.

“I think that such a tremendous amount of activity happens there, and it’s a place where we could get better investor protection … even in the decentralized platforms, or so-called DeFi platforms, there is a centralized protocol. And though they don’t take custody in the same way, those are the places where we can get the maximum amount of public policy.”

Gensler repeatedly urged exchanges to register with the SEC, something he has done in past appearances, and decried the exodus of exchanges to friendlier jurisdictions.

“I think firms should just come in and register,” Gensler said. “But what’s happened over the last four or five years is they’ve either chosen not to or they’ve stood up in Singapore or Malta or Hong Kong or other countries and offered their services indirectly through a virtual private network.”

Rep. Anthony Gonzalez (R-Ohio) pointed out that simply “coming in and registering” with the SEC might not be feasible for some exchanges.

“I’ve been speaking with multiple companies in the space, and the common theme in these discussions is that they want to come in and describe their product to the SEC; however, they’re concerned that these meetings could lead to a potential enforcement action,” Gonzalez said. “This sort of friendly open door conversation is not something they believe they’re experiencing.”

When asked his thoughts on investment platforms like Robinhood that offer digital assets alongside stocks, Gensler stressed the need for crypto exchanges to register with the SEC.

“I think if we don’t get these exchanges, these lending platforms inside of the public policy framework, a lot of people are gonna be hurt,” Gensler said. “I think it’s clear that many of these projects are within the securities laws. We’re gonna use our authorities to try to get more of these projects and companies to register and be within the investor protection framework.”

Though Gensler asserted several times during Tuesday’s hearing that the SEC already has sufficient authority to regulate cryptocurrencies, he suggested that Congress could be helpful in deciding how to regulate “stable-value coins.”

When asked if he considered stablecoins a systemic risk to the U.S. economy, Gensler doubled down on his previous analogy comparing stablecoins to “poker chips” at a crypto “casino.”

“I think the $125 billion of stablecoins we have right now are like the poker chips at a casino, and I think they create risks in the system,” Gensler said. “Yes, I think if this continues to grow – and it’s grown about 10-fold in the past year – it can present those system-wide risks.”

The statements came hours after CoinDesk first revealed that Circle, a key backer of the USDC stablecoin along with Coinbase, had been hit with an investigative subpoena from the SEC’s enforcement division.

“You can see where it could start to undermine things if it continues to grow,” Gensler said. “[How it could] undermine traditional banking systems if it’s not brought inside the remit of banking.”

Gensler, however, seemed to suggest that dollar-backed stablecoins with “clear and clean reserves” could be “different,” from what one representative called “junk coins” with unknown reserves.

“Wrapping something computer graphically around fiat money could be different, it could be directly around deposits at a bank or, at the other end of the spectrum, it could look a lot like a money market fund,” Gensler said. “It really depends on the underlying assets.”

Gensler also stressed that part of the SEC’s issue with stablecoins is that they have been used within exchanges “in part to avert laws around tax compliance and illicit activity.”

Gensler also doubled down on previous statements he made to the Washington Post that he didn’t see a long-term future for the majority of crypto projects.

“It’s unlikely that 5,000 or 6,000 private forms of currency are gonna persist. Economic history tells us that’s unlikely. A handful might be competing with gold or silver as a digital speculative store of value … but not many of them. Most of them are speculative asset vehicles.”

Although Gensler repeatedly said he wouldn’t comment on any token in particular, he called bitcoin a store of value.

“Bitcoin … is a highly speculative asset, but it is a store of value that people wish to invest in as some would invest in gold,” he said.

No one is banning crypto (right now)

Rep. Ted Budd (R-N.C.) brought up China’s most recent crackdown against cryptocurrencies and crypto mining, and asked Gensler if the SEC was planning to implement similar bans.

After initially demurring, Gensler was forced to answer when Budd asked again directly: “But no bans that you’re interested in implementing via the SEC as China has done, really to funnel everyone through their own digital currency?”

“No, that would be up to Congress,” Gensler said.