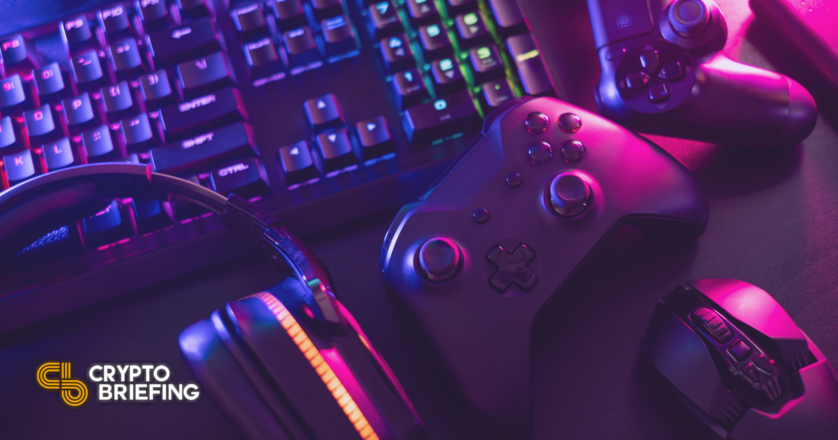 Five Play-to-Earn Crypto Games to Look Out For

NFT-powered play-to-earn games have quickly risen to become the fastest-growing sector of the crypto economy.
The play-to-earn model has stolen the spotlight from traditional games because of the built-in incentives that shift power from game publishers and toward players.
With more than 3.2 billion gamers around the world, blockchain games are set to become one of the primary drivers for mainstream crypto adoption.

The rise of NFT-powered blockchain games has transformed the gaming industry by making the players the primary financial beneficiaries and decision-makers in the ecosystem. Play-to-earn gaming looks set to be one of the biggest drivers for mainstream crypto adoption over the coming years, which is why Crypto Briefing has compiled a list of the most anticipated titles to help readers stay ahead of the curve.

The rise of NFTs and the massive success of Axie Infinity, the most popular blockchain game to date, have propelled the play-to-earn model into the spotlight of the gaming space this year.

Axie’s native token AXS has rallied over 2,000% since the beginning of July and is currently boasting a market capitalization of around $7.6 billion. With more than 2 million daily active players, the game is currently one of the top revenue-generating protocols in crypto, second only to Ethereum, with more than $850 million in revenue generated from in-game transactions over the last 12 months.

Axie’s rise has revealed the demand for crypto-based, player-owned games where the actual financial beneficiaries and decision-makers are not the game developers or publishers. Instead, they are the players. With that, a new breed of games was born—one where players can own and freely trade in-game assets and characters to earn instead of spending money on updates.

Several play-to-earn blockchain games have launched over the last year. While some flopped, others like Gods Unchained, CryptoBlades, Splinterlands, and Arc8 have gained huge momentum. Many of those who started playing these games early made significant profits, prompting crypto speculators and gamers alike to start looking for the next big hit. The following list details five of the most promising titles to date.

Headshotting enemy players might be one of the coolest ways to stack sats, and that’s precisely the joy this game provides. Developed by Satoshi’s Games, Lightnite is a Fortnite-like online multiplayer battle royale game where every in-game interaction between players triggers a monetary reward or penalty. The Beta version is already live, whereas the full version is scheduled for release in November 2021.

Lightnite implements an exciting twist on the play-to-earn model because its monetary incentives go two ways: players who outskill others in PvP combat can earn Bitcoin, while those who get shot are penalized and lose Bitcoin.

Lightnite leverages Bitcoin’s Layer 2 solution Lightning Network to integrate microtransactions in the game. Every player has an in-game balance that increases in real-time when he shoots other players or picks up valuable items and decreases when he gets shot or dies. Players can withdraw their balance into their own wallets when they exit the game and then save it or spend it on whatever they’d like, real-world and in-game items included.

Developed by Pixowl Inc., Sandbox is a virtual world that lets players build, own, and monetize their gaming experiences on the Ethereum blockchain. Sandbox players can buy and own land, develop their own games and in-game virtual worlds, and trade in-game items such as NFT tickets to in-game concerts and amusement parks.

Sandbox’s goal is to disrupt existing games like Minecraft and Roblox by providing the players and in-game creators with ownership of their creations in the form of NFTs and rewarding them for their ecosystem contributions. A limited Beta version of the game is already live, while the launch of the first open alpha is scheduled for late 2021.

The limited real estate of Sandbox’s in-game territory is called LAND. It can be purchased with the in-game currency SAND, which is already issued and has a current market capitalization of roughly $697 million. Moreover, players can also trade NFTs representing all kinds of metaverse items, including avatar skins or merchandise sold in player-owned in-game stores.

Notably, while Sandbox is still in development and estimated to launch in late 2022, several big names like the Winklevoss twins and Atari have already bought large plots of LAND in the game.

Star Atlas is arguably the most anticipated blockchain game to date. It’s a space-themed, grand strategy video game set in the year 2620, built on the Solana blockchain using the groundbreaking Unreal 5 video game engine to provide cinema-quality real-time environments. Judging by the trailers, Star Atlas could be a visual spectacle.

Players will captain deep-space, crewed spaceships across an open world of galaxies to discover various celestial and terrestrial assets. Once found, these assets can be mined, refined, and traded on the Universal Marketplace. The game will feature two in-game currencies called ATLAS and POLIS, NFT-based asset ownership, built-in DeFi via the Serum decentralized exchange, and on-chain governance models like DAOs to power in-game political organizations like guilds and alliances.

Star Atlas recalls Entropia Universe or EVE Online, with play-to-earn mechanics thanks to real crypto-powered economies and next-generation graphics. If it lives up to the hype, it’s sure to be one of the space’s biggest success stories.

Illuvium is an up-and-coming Pokémon-inspired RPG universe where players will be able to capture so-called Illuvials or NFT-based alien monsters of different affinities, classes, and abilities and battle them against other players to win Ethereum. The game is built on the StarkWare-powered Immutable X platform and is expected to be released near the end of 2021.

One of the most unique aspects of Illuvium is that the primary currency for in-game purchases will be Etheruem, while the game’s native token ILV will have nothing to do with the game’s mechanics. Instead, it will serve as a governance and revenue share token. For instance, ILV holders can currently stake their tokens into the Illuvium Vault, which presently yields up to 63% from token distributions. Furthermore, the protocol will redistribute 100% of the revenue generated from in-game purchases and fees to the Vault once the game goes live.

Hypothetically, if Illuvium generated the equivalent of Axie Infinity in monthly revenue ($300 million), every staked ILV token would receive at least $30 per ILV per month, assuming the entire fully diluted supply of 10 million tokens is staked.

Guild of Guardians is an NFT-powered, blockchain-based mobile role-playing game that lets players build a dream team of “Guardians” to compete in guilds, raid dungeons, and craft unique assets to earn tradable rewards. The game was created by Stepico and published by Immutable, the team behind Ethereum’s highest-grossing trading card game, Gods Unchained. It’s slated for release in early 2022.

The game is among the top-awaited projects in the space, with over 140,000 players on the waitlist, 68,000 Twitter followers, and 66,000 members on Discord. Guild of Guardians is also working with Ubisoft and is partnered with Sandbox to maximize its chances of success.

Like other play-to-earn titles, it has its own in-game token called Chain Guardians (CGG). The token will serve both as a utility and a governance token, rewarding players for actively participating in the ecosystem. In June, Guild of Guardians also completed its first “NFT Founder Sale,” featuring a collection of NFTs that players will use to summon rare, epic, or legendary heroes that will be playable once the game goes live.