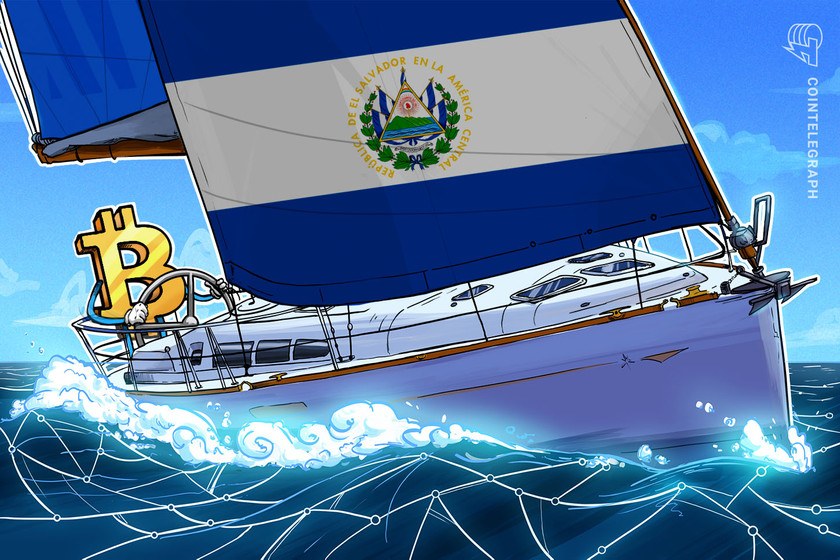 In an exclusive interview with Cointelegraph, a policymaker from El Salvador reveals how BTC has been helping the country change people’s lives.

Dania Gonzalez, Deputy of the Republic of El Salvador, was recently in Brazil to reveal her country’s experiences with the decision to adopt Bitcoin (BTC) as legal tender. Gonzalez’s invitation to Brazil came from digital influencer Rodrix Digital, who was recently in El Salvador to produce a documentary about cryptocurrencies.

Among the lawmaker’s activities in Brazil was attending Bitconf 2022 and meeting with Dape Capital CEO Daniele Abdo Philippi and Ana ?lle, CEO of Agency ROE.

Between her agendas, Gonzalez spoke with Cointelegraph and revealed how Bitcoin has helped change people’s lives in El Salvador and how the country’s federal government, led by President Nayib Bukele, has been taking advantage of the resources invested in BTC to improve the economy.

Asked about El Salvador’s investment in Bitcoin and how it can impact people’s lives as the value of BTC is falling, Gonzalez highlighted that every investment has a cost and a benefit.

“What Nayib Bukele did was buy Bitcoins and make a profit at a certain strategic moment,” she said. “In cryptocurrencies there are times when you can make a profit and there are times when you have to invest more. Now cryptocurrency is down, this happens, it’s normal, but at this point instead of being sad, instead of thinking that you lost all your investment, it’s time to buy more bitcoins because now the price is cheap, that’s the strategy.”

According to Gonzalez, El Salvador is already benefiting from investments made in Bitcoin; she cited two ventures — a veterinary hospital and a public school — that were made possible thanks to cryptocurrency. She explained:

“Bukele built a veterinary hospital to benefit the population where services, any service for your pet, costs US$0.25. Even an operation costs this amount and that is accessible to the entire population. Bitcoin has been converted into a benefit for the people. Now with the reserve we have in Bitcoin we must build 20 more schools. Before Bitcoin, to do this we had to approve projects, include it in the nation’s general budget and use people’s money to construction. Now these works are done thanks to all the profits made with bitcoin.”

Gonzalez indicated that Bukele’s strategy has already proven to be successful in terms of socioeconomic impact.

“This is the main reason why the president also buys Bitcoins,” she said. “He does this to be able to generate profits for social projects for the people […] This is not just words, it is something tangible for the population because they can see part of the public services being realized thanks to Bitcoin profits.”

Cointelegraph also spoke with the lawmaker about central bank digital currencies, also known as CBDCs, and how their issuance by nations can impact the cryptocurrency market.

Gonzalez stated that she does not see a clash between cryptocurrencies and CBDCs, believing that both should coexist together in the digital ecosystem that will guide nations in the future. Furthermore, she stated that the proposed issuance of CBDCs by countries shows that they have understood the power of the cryptoeconomy.

The deputy also highlighted that El Salvador is working to expand the effects of the Bitcoin Law and will build an ecosystem based on cryptocurrencies, with the elimination of taxes for sectors linked to the crypto economy.

In addition, she highlighted that other laws will be reformulated to meet the new demands of the digital economy and to reduce bureaucracy in public administration procedures. She explained:

“We want it to be possible to open a business in 5 minutes here in El Salvador […] We already have a national digital wallet system for cryptocurrencies and we intend to make a law so that investors from all over the world can have immediate citizenship in El Salvador if they invest in the world of bitcoin in our country.”

Gonz?lez also revealed to Cointelegraph that the adoption of Bitcoin as a legal tender attracted investors and companies from all over the world and strengthened merchants and local communities independence from bank monopolies.

“It opened up an opportunity for independent merchants to have a new payment gateway, because the payment channels could be cash or could be credit or debit cards,” she said. “But if you go to a bank and want to apply for the [point of sales] to accept credit payments or debit, you pay a membership fee, you pay a commission that can be up to 9% for each purchase.”

Bitcoin, on the other hand, “is fully decentralized financing, there is no commission if you use the national wallet,” she explained.

Another direct benefit cited by the deputy is related to the financial remittances made by Salvadorans who live in other countries such as the United States. According to the deputy, there are 7 million Salvadorans living inside El Salvador and approximately 3 million outside the borders, mainly in the United States:

Thanks to Bitcoin, remittances from the United States can be made without fees, she said. Gonzalez also claimed that Western Union lost roughly $400 million in remittance business last year because of El Salvador’s Bitcoin Law.

Gonzalez revealed details about her country’s Bitcoin Beach and Surf City projects, both carried out in the El Zonte region. In them, Bitcoin is used as a form of social transformation that promotes crypto payments and economic development through digital assets.

And all the Central Bankers screamed…. pic.twitter.com/MxdOrYD3lc

She explained that Bitcoin Beach existed before the BTC law was passed. On Bitcoin Beach, “you can buy a soda or a “Pupusa,” a typical El Salvador food, on the street or go to a prestigious restaurant and you can pay with Bitcoins.”

Related: El Salvador’s Bitcoin play: What does the current slump mean for adoption?

The deputy also revealed that a project called Surf City is underway in El Zonte, which seeks to train the local community to take advantage of tourism related to surfing, as the beach has some of the best waves for the sport.

“These communities have now benefited from job opportunities in businesses or work in hotels and restaurants that now have more potential than before, now more tourists come to El Salvador because they […] Can pay for everything they want with Bitcoins,” she said. “I know companies that came from Singapore a few months ago and now have about 50 Salvadorans working on their operations. This shows how Bitcoin has been changing people’s lives in El Salvador.”

In addition, the deputy highlighted how Bitcoin has been favoring the unbanked who now, through cryptocurrency, can access financial services without the bureaucracy of traditional systems:

“Traditional banks excluded 70% of the country’s population from their services for different reasons. In addition, of the 30% of the population that has access to financial services, only 23% were in banks, while 7% did so through cooperatives with very high rates. Now Bitcoin and cryptocurrencies are favoring this excluded population that now has power and opportunity.”