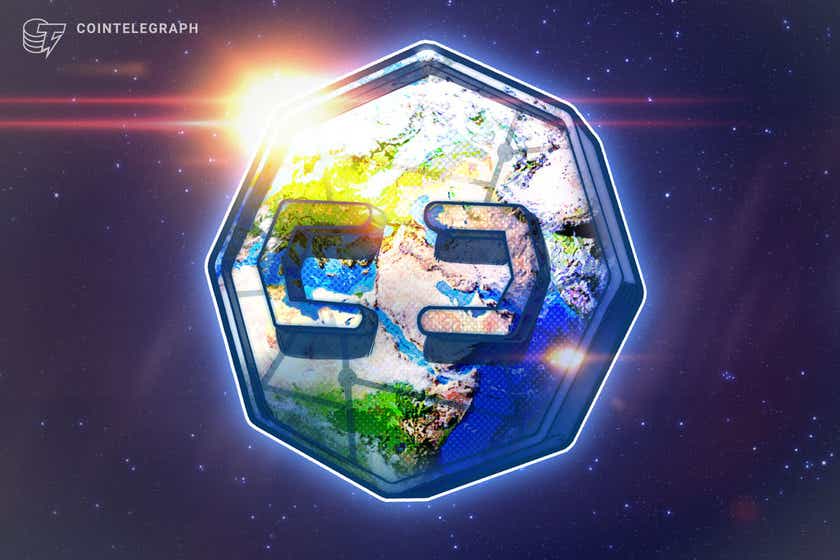 A panel of thought leaders and blockchain visionaries from around the globe converged in Glasgow, Scotland on Nov. 11 for the United Nations Climate Change Conference (COP26) summit to announce the finalists and winners of the DigitalArt4Climate competition.

DigitalArt4Climate is a multi-faceted crypto climate initiative, organized by IAAI GloCha in collaboration with the UN-Habitat youth program, which empowers the global community of artists to create nonfungible token (NFT) works inherently focused on advocating for climate action.

Moderated by the CEO of The Oblique Life, Romi Sumaria, and attended by head of metaverse growth at Unique Network, Irina Karagyuar, founder of DigitalArt4Climate Miroslav Polzer and Cointelegraph editor-in-chief Kristina Corner, among others, the panelists shared an array of projects and ideas for the use of clean, carbon-efficient technologies to support imminent environmental challenges.

DigitalArt4Climate representatives and partners at the COP26 conference

Founder of GloCha, DigitalArt4Climate and esteemed COP26 host Miroslav Polzer announced that the competition had received 208 entries from across 58 countries, and noted that the artists utilized an array of traditional and technological instruments and mediums ranging from digitized acrylic and mural paintings to artificial intelligence and generative art.

In addition to showcasing the work of the 30 finalists throughout the COP26 summit on digital billboards and via the project’s website, DigitalArt4Climate has also partnered with environmentally-conscious metaverse space Artgence to create a three-dimensional and emotionally immersive virtual gallery.

The distinguished collection is expected to be individually auctioned off on June 5, 2022, recognized globally as World Environment Day, in support of the seventeen UN Sustainable Development Goals and Agenda 2030.

Broadcasting a philosophical vision on how artistic recognition can allow us to acknowledge universal challenges, Miroslav Polzer stated:

The four competition winners were decided by the results of an online public vote while the competition’s special winner slot was selected by members of the consortium.

First prize was awarded to Filipino digital ecological artist, Bricx Martillo Dumas, for his piece titled Nexus, a sorrowful depiction of a human hand holding a plastic bag containing a blue-colored drink and straw, in addition to a cigarette whose smoke floats into the atmosphere as tiny leaves.

Martillo spoke passionately (2:55 timestamp) about the importance of collective ownership in pursuing climate action, citing his life-changing experience of Typhoon Haiyan in November 2013 in his hometown in the Philippines as the fundamental reason for his environmental impetus behind climate action.

Second place in the competition was awarded to three artists: Iranian artist Amir Karimi for Every Second Lake, French artist Ekaterina Lestienne for The Wildfire and United States artist Chloe Hajjar for Allegory of Survival.

Finally, the competition’s special award, the solitary choice by the consortium, was granted to Mathare Roots and the Graffiti Girls from Mlango Kubwa for their mural artwork, Team Spirit in Kenya.

Second placed artist, Lestienne shared vivid insights to the audience into the visual ideology of her piece.

“My layered, detailed, textured digital collage refers to the multidimensional soul of the world and can be interpreted as our precious and beautiful planet being ripped to peace by extreme climate events.”

Later in the conference, the head of metaverse growth at Unique Network, Irina Karagyuar, spoke proficiently about the importance of galvanizing humanity as a collective force to cultivate a sustainable and technologically dynamic ecosystem for the next generation:

“We have inherited incredible legacies from our common ancestors. Let’s become the ancestors that next generations will be proud of. Let’s be passionate, vulnerable and rebel for life. Let’s look deeply at entirely new ways and tools to build a better world. Let our lives document humanity’s impact on the planet.”

Unique Network, a parachain project in the Kusama and Polkadot ecosystem, was selected by the United Nations to facilitate an NFT climate initiative back in August 2021, as was reported by Cointelegraph.

By visiting the DigitalArt4Climate website, users with a Polkadot JS wallet address can now claim an environmentally-friendly free NFT asset titled Global Angel. The artwork, which has been facilitated by Unique Network and built upon the Polkadot relay chain, signifies a message of unification between our physical and digital worlds.