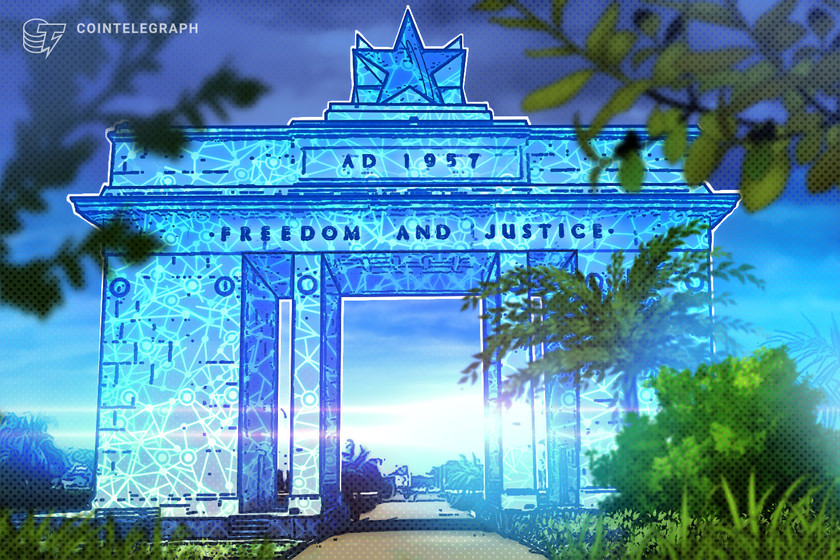 Blockchain for sustainable development: The case of Ghana

How blockchain technology might help developing economies to increase financial inclusion — a closer look at financial services in Ghana.

In modern times of rapid globalization and digitization, technological developments have now reached such proportions that the usage of cryptocurrencies is no new phenomenon. The technology behind blockchain opens the internet for financial services by replacing trust, a fundamental component of the financial system for centuries, with transparency integrated into a decentralized network. Thereby, blockchain bears the potential to help achieve the United Nations’ Sustainable Development Goals (SDG) by empowering the unbanked, predominantly women, reducing transaction fees as well as creating an alternative source of liquidity.

Only 57.7% of adults in Ghana in 2021 had a bank account. Unable to afford participation in the formal financial system, the poor find themselves paying the most for fundamental financial services. Moreover, there is a multiplier effect inherent with the economic participation of women that takes wide-ranging consequences respecting a number of SDGs.

Related: The UN’s ‘decade of delivery’ needs blockchain to succeed

Financial inclusion may alleviate poverty, improve health and well-being, gender equality, take a positive effect on children’s education, and more. Access to affordable financial services thus becomes a catalyst for economic growth and opportunity. Simply put, there is a lot at stake here. Let’s dig into it.

Sharing borders with the Ivory Coast, Burkina Faso and Togo, Ghana lies in the heart of West Africa. The population is about 32 million, and besides various tribal languages, English is one of the recognized national languages. Frequently seen as West Africa’s economic powerhouse, in 2020, the country’s purchasing power parity (gross domestic product per capita) was around $5,744 United States dollars. Until it was hit by a severe banking crisis spanning from 2017 to 2020, Ghana’s economic growth had been astounding — the epitome of what many countries in the region ought to achieve. Shaken by just another crisis, going by the name COVID-19, the economy is in the process of recovery.

Ghana’s wealthy remain concentrated in the south’s urban areas and lower-income households dispersed across the countryside, home to most of the population. As a result, banking services are largely located in urban areas. Despite that, a 2010 research concluded that physical access to banks is not the central barrier to banking but rather Know Your Customer (KYC) requirements that many of the unbanked are unable to fulfill. Also, 64% of the respondents stated inadequacy of income as being the prime reason for not having a bank account. Although this study may seem outdated, a new study from 2021 arrived at similar conclusions by pointing out that one of the main hardships of opening a bank account resides in the lack of financial resources.

Essential to the country’s financial services infrastructure is mobile money, which accompanies the everyday life of millions of Ghanaians — approximately 38.9% of the population in 2021 had registered a mobile money account. Mobile money, introduced in 2009, is a financial service that enables people to transfer money and handle payments without the need of having a bank account. All that is required to complete a transaction is a mobile phone capable of sending SMS.

Dependent on the network provider, mobile money allows account holders to access credit and other kinds of financial products. It has the added advantage that its KYC requirements are lax compared with that of banks. In most cases, one “only” needs proof of identity to open an account. Taken together, this may come as just another hindrance to financial inclusion (not everyone may have a phone or identification documents), but this is as low as the barrier gets. Two of its distinct disadvantages, however, are transaction and withdrawal fees. MTN, for example, charges for mobile money transfers up to 5%. Charges that may seem minor but build up over time.

On Nov. 17, 2021, the Ghanaian government announced the enactment of an e-transaction levy of 1.75%, intending to fill up state coffers. Initially proposed to come to pass by February, the e-levy remains postponed due to fierce opposition. Yet it’s been asserted that irrespective of the electronic tax, most people will keep using mobile money.

Lastly, foreign remittances is a topic that cannot be overlooked when discussing the situation of financial services in Ghana. Receiving remittances accounts for a noticeable portion of the country’s GDP, as it does in several developing countries.

In 2018, Ghana was the second-largest recipient of remittances in West Africa after Nigeria. With more Ghanaians migrating to Europe and North America, a substantial number of households rely on remittances to make ends meet. While banks are commonly the most expensive choice for international transactions, money transfer services deliver the money to a bank, cash pickup location or mobile account at a lower cost.

Cryptocurrency has a competitive edge over cross-border transactions. In many cases, owing to fewer middlemen, sending money internationally is cheaper and faster via blockchain. As reported by the World Bank, the average expense of sending $200 was 6.8% in the third quarter of 2020. In fact, facilitating international remittances was pivotal for El Salvador’s policy decision of launching Bitcoin as a legal tender in September 2021. The SDGs also recognize substantial costs for remittances as a factor that impedes financial inclusion and, thus, have set the objective of reducing them to 3% by 2030.

Blockchain‘s features of being incorruptible and void of intermediaries may help to better serve the unbanked. In turn, this could also lead to a diversification of the financial services market, which has traditionally been dominated by banks. Without delving into reams of technological gobbledygook, blockchain-based cryptocurrencies could do all (and more) that banking institutions can do, but without a third-party controlling user data and charging people stupendous fees for basic services.

Besides all that crypto can do, more than 10 years after the first Bitcoin (BTC), it has not yet achieved wide consumer adoption. Drawing on quantitative surveys conducted with people living in the Greater Accra Region, the country’s most urbanized region and location of its capital city, the findings indicate a lack of trust in cryptocurrencies’ future: Is it a financial bubble, or will it replace national currencies, gaining trust in the process? No one can tell for sure. Nonetheless, the findings also reported a good chance for cryptocurrencies to pick up steam and enrich the financial services market, especially if they would be easier to use, more stable, and accepted by shops to be used for daily purchases.

It appears that people do not yet have the knowledge required to perform cryptocurrency transactions (not only in Africa, as other surveys show). Indeed, it takes a huge amount of time to get your head around it.

Lack of trust thrives on lack of knowledge that impedes crypto’s adoption — the demonizing way in which this financial tool is regularly portrayed by much of the media does not do good either. It is a vicious cycle that cannot be disentangled unless there exists an easy-to-use financial service that both individuals and shop owners can use. As soon as there is such a platform, perhaps with which one can transfer funds via SMS (thus built on an existing infrastructure a good deal of Ghanaians are familiar with), this cycle may be challenged and cryptocurrency’s adoption accelerated. That being said, there are businesses working on SMS-based blockchain transactions. Although this does not mean replacing other types of financial tools, it would diversify the financial services sector and include individuals who have so far been left out.

At this juncture, it is worth noting that the fluctuation in the price of some cryptocurrencies can be overcome by employing stablecoins, cryptocurrencies that are pegged to fiat — i.e., government-issued currencies — or precious metals. While critics are quick to point out that those coins are no longer decentralized as, in terms of fiat, their value heavily depends on the performance of the currency they mirror. Some firms in the crypto space have succeeded in developing relatively decentralized stablecoins — e.g., MakerDAO’s Dai).

Also, more than 70 countries are currently working on establishing a digital equivalent of their national currencies. Referred to as central bank digital currencies (CBDC), a digital equivalent of national currencies given out by central banks may amp up consumer protections and spark a regulatory framework, entailing fiscal and monetary policy, for a significant part of the financial system, which has so far widely eluded authorities. Of course, there are drawbacks: Users would have to give up some degree of privacy and control, while central banks would be equipped with inconceivable power allowing them to date back transactions, render them undone, etc. — away with the “tamper-proof” quality of decentralized finance. It’s a superb opportunity for the model authoritarian government that wishes to consolidate its grip over financial transactions, and citizens. Ergo, cryptocurrency and blockchain may be a medium of freedom or be misused for dystopian outcomes.

On the other hand, by providing a simple infrastructure for kickstarting crypto, CBDCs joined with a user-friendly platform could be the starting point and gateway through which people can learn about cryptocurrency and become empowered. Henceforth, people may feel encouraged to scout the cosmos surrounding cryptocurrency, grow their financial literary muscle, and move savings to decentralized solutions.

Lessons taken from El Salvador could help propel financial inclusion through crypto in other parts of the world. While this article cannot explore all the arguments around CBDCs, they may just be one way to generate trust, incite financial inclusion, and accelerate the adoption of crypto. Acknowledging the immense potential of cryptocurrency, I find that it will in all likelihood increase in relevance. What concerns me is rather how much time it requires for cryptocurrency to gain ground, considering that many of those in power hold a vested interest in keeping things as they are. Glancing at history, I am confident its adoption will be quicker than the move from cowrie shells to fiat.

One more time about inclusion

By offering a fairer and more transparent financial system, cryptocurrencies and blockchain pose an alternative to conventional financial services. Recognizing cryptocurrency and blockchain for financial inclusion and looking beyond mobile money and banking infrastructures are critical to catering to people’s need for access to affordable financial services. A user-friendly platform is needed to facilitate the usage for individuals and businesses. With this, anyone could access the benefits without extensive knowledge of blockchain. Crypto would likely be accepted by shops, helping foster the delivery of financial inclusion on part of the U.N.’s Sustainable Development Goals. Nevertheless, regulatory frameworks and financial education should not be understated when tackling financial exclusion.

Ultimately, it becomes apparent that what blockchain threatens to replace is the very nature of the financial system by bypassing the issue of trust. Due to its brevity, the article left out many technical aspects of blockchain, such as custodial and noncustodial wallets, decentralized and centralized exchanges, and different types of blockchains, cryptocurrencies and consensus mechanisms, but I encourage everyone to set out on the journey of exploring (“googling”) these and other concepts. Having done research on this matter for a considerable amount of time, albeit it is a tedious undertaking, I can assure you it is a thought-provoking and knowledge-enhancing one. Since much of blockchain is still in its infancy, it’s a good time to start reading about it now.

This article does not contain investment advice or recommendations. Every investment and trading move involves risk, and readers should conduct their own research when making a decision.

The views, thoughts and opinions expressed here are the author’s alone and do not necessarily reflect or represent the views and opinions of Cointelegraph.

Dustin Jung is a blockchain enthusiast. He holds two master’s degrees in the fields of social science and management studies from the University of Freiburg, International Business School Budapest, and the University of Buckingham. Having lived in Ghana from 2018 to 2019, Dustin quickly became passionate about how blockchain can drive sustainable development in developing countries.