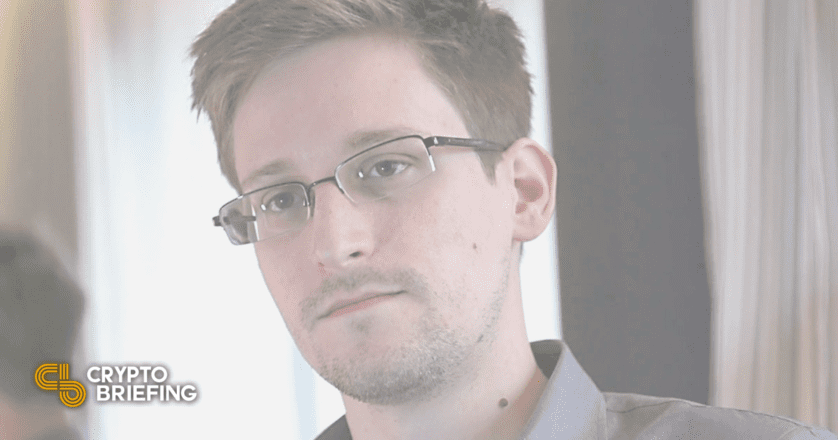 Bitcoin “Is Failing as an Electronic Cash System”: Edward Snowden

Edward Snowden has said that he is “very much a fan” of Bitcoin, but he thinks that its lack of privacy could mean it fails in the long term.
The American whistleblower said that there are multiple crypto assets that can be thought of as money akin to gold rather than currencies.
He added that he thinks competition between cryptocurrencies is a net positive for the world.

The American whistleblower has expressed his concerns about the financialization of the crypto space, but stressed that he sees huge promise in the technology.

Edward Snowden says he believes in the crypto movement, but he thinks there are some major hurdles to address over the coming years.

Speaking in a virtual interview at Consensus 2022 in Austin today, the American whistleblower and President of the Freedom of the Press Foundation shared his thoughts on the promise of the emerging technology and issued a clear warning about the dangers of a world devoid of financial privacy with respect to crypto.

Snowden, who made international headlines when he leaked classified National Security Agency documents detailing surveillance practices of U.S. citizens in 2013, described Bitcoin’s public nature as a “core flaw” and said that the biggest reason for why it could fail is because it is not private. “It is failing as an electronic cash system because cash is largely intended to be anonymous,” he said, referencing the Bitcoin whitepaper (Satoshi Nakamoto famously touted Bitcoin as “a peer-to-peer electronic cash system.)

Though he said he saw issued with Bitcoin’s public ledger, Snowden clarified that he was “very much a fan” of the technology and made a comparison between gold and cryptocurrencies, noting that the borderless nature of Bitcoin and crypto more broadly is “an astonishing thing.” Shortly after the discussion, Snowden posted a tweet describing gold as “Bitcoin that can’t be sent over the Internet.”

He also namechecked several other innovations in the cryptocurrency space, including the privacy coins Zcash and Monero. Snowden recently revealed that he helped create Zcash under the pseudonym John Dobbertin, and he said that he was “really impressed” by its zero-knowledge proof technology when he first read the whitepaper.

Elaborating on his views of the promise of crypto technology, Snowden added that many crypto assets are “closer to money” than currencies. “People don’t understand the difference but money is a thing that holds value, a token that can be exchanged that is not independently controlled by any central authority,” he said.

“[Users are] not thinking primarily about what are the networks that are going to serve us for 100 years for transferring value,” he said. “I am worried about a world in which our money is used against us.”

Snowden said that he hopes to see people get access to “free money in the independence sense.” In what could be interpreted as an endorsement of the broader crypto ecosystem rather than any one specific asset, he suggested that having multiple assets that could act as money was a good thing for the world. “I think the more competition we have there, then all the better,” he said.