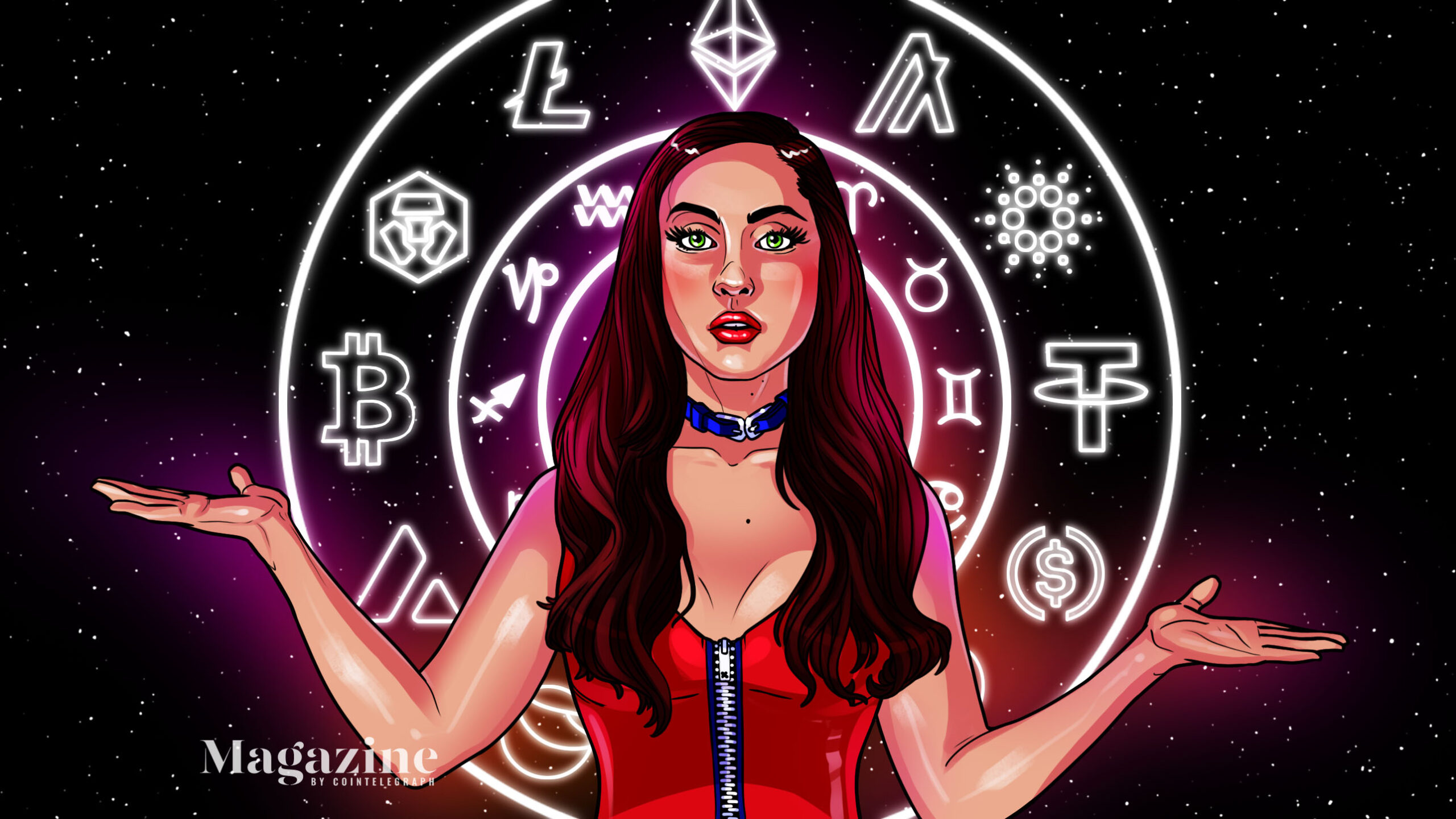 Are future prices written in the stars? Meet Maren Altman, presciently named for cryptocurrency, who combines astrology and day trading crypto into a winning blend.

In 1973, Princeton University professor Burton Malkiel published his book A Random Walk Down Wall Street, in which he famously states that a “blindfolded monkey throwing darts at a newspaper’s financial pages could select a portfolio that would do just as well as one carefully selected by experts.”

Fast forward to 2013, and Rob Arnott, CEO of Research Affiliates, conducted research mimicking monkeys using AI and actually discovered the monkeys had done a much better job than both the experts and the stock market. Closer examination proved the success was a result of the random selection of companies by the “monkey approach,” optimizing their success. However, it is a sobering thought that not only machines but possibly primates can outperform humans in stock picking.

It’s a small step, perhaps, to look at the potential of astrology to determine the future price of Bitcoin. Unlike a stock, whose performance is dictated by both the business performance of a company and the sector in which it operates, technical analysts’ predictions for Bitcoin price movements depend on reviewing charts and patterns — similar to that performed by astrologists.

Maren Altman reads the charts and predicts the future of crypto.

In the gutter, looking at the stars

So, how do you predict the price of Bitcoin with astrology? Enter Maren Altman, who calls herself “your personal poet to the stars, especially on TikTok,” and has made a name for herself over the last two years by using astrology to predict price — but not without attracting some controversy.

“I was always the weird girl who asked people about their star signs. In college, I used to earn pocket money by doing people’s charts at parties. I have always been fascinated by astrology.”

It was a natural fit for Altman to run Bitcoin through the charts, using the genesis block as the birth date — after all, anything with a birth date can be plugged into the astrology charts. Altman bought some Bitcoin back in 2017 but had largely forgotten about it until she became interested again in March 2020 when she was studying philosophy at NYU, along with the rest of the student population — nothing like a good pandemic and soaring price to grab interest.

“I grew up with astrology where patterns and cycles are tracked. I was also familiar with financial astrology, so it just made sense to apply it to cryptocurrency,” says Altman.

One of her first notable calls was in January 2021, where she observed that the new moon in Capricorn, on Jan. 13, looked big for Bitcoin. She went on to predict a dip followed by a bull run. Her call was prescient, with Bitcoin continuing to double in price before April. To counter that, she predicted all-time highs in May, with largely unremarkable success, and Bitcoin floundering instead in its first notable dip of 2021.

Becoming a day trader proved profitable for Altman, but it was not without its stresses.

“It was not enough to call the price; I had to be able to execute,” she says. “And, some days, I made mistakes and lost money, but it was not the fault of the charts but my errors.”

She sees astrology as a giant mirror where certain signifiers of planetary alignments represent themes such as world growth, or even world aggression or peace. By reading those patterns and overplaying them on what has already happened, she can trace future movements or, in the case of cryptocurrency, prices.

Altman acknowledges that it can be hard to read the charts — there is a system of patterns but also multiple cycles that can result in misreading. Having said that, she is still ahead of the game.

“Either way, I am 100% transparent with my trades. I share everything,” she says.

She began trading and posting on social media in earnest in the summer of 2020, and today, she has more than a million followers on TikTok and more than 2 million combined on all her socials.

When asked why she gained such traction, Altman shrugs her shoulders.

“I am a bit of a character. I’m young, I’m a woman and I wear mostly red. But, I am also serious, I don’t dumb myself down and I make my living though crypto. I guess it just blew up in a perfect storm of weirdness.”

Did she predict Jan. 6, or did she just read the newspapers?

It might also be down to her humor and calling both the Biden presidential win and the Jan. 6, 2021 uprising, although political majors might have achieved similar success through reading the papers.

She also picked up a number of high-profile features in tier-one publications such as The Washington Post, Reuters and The New Yorker — not magazines that frequently publicize highly improbable predictions.

Scrolling through her popular TikToks at one point when talking about flipping NFTs, she explains that she put a down payment on an apartment in Dubai by flipping one NFT. It’s pretty inspirational.

Mostly, though, her income is through her trading, and she is reluctant to do much monetization of her socials.

“I’ve been hesitant to partner with paid sponsors because everyone in crypto hates people that monetize their socials. It’s just not done,” she explains.

She has written several articles for crypto traders and for market analyst Mati Greenspan on his Quantum Economics platform, but she is not directly employed by him.

In other interviews, she points to her Astrology Academy, where she offers astrology training to paying clients. There are about 150 paying clients. She says that she has 1,000 people in her membership community paying between $7 and $50 a month for her teachings.

Charting a course through the storm

At this point, I ask if she has had much pushback. Yes, she has, to the point of having to flee the country because of death threats.

“New York was no longer safe for me, and so I went to friends in Dubai,” she says.

Altman is back in New York when we speak, but she references the trolling campaign spearheaded by a 2021 article in Rolling Stone where she was called a white supremacist, a racist, homophobic and transphobic, among other things. Worryingly, given her following, it accused her of plagiarism.

Altman was criticized by Rolling Stone.

There is a lot to unpack in the series of tweets and articles written around this time. BIPOC astrologers in the same field, such as AstroDim, said that Altman had, at first, dissed their commentary that President Biden would die in office but then reposted similar predictions later on.

In other social media flareups, Altman, a vegan, has used inflammatory images and texts in support of her dietary choices. Again, it has caused some backlash.

The BIPOC astrologers in the same article also maintained that there is a general bias against BIPOC people across social media platforms, targeting TikTok in particular.

The biggest complaint made against Altman by the BIPOC astrologers in that 2021 Rolling Stone article is that when Altman talks about the same topics as they do, she gets more views. That might say more about America than astrology.

Altman apologized in a number of videos about her comments and videos on gender fluidity, trans people and animal/meat eaters before going offline during the Mercury retrograde when she went to Dubai.

According to Altman, she was not trolled by crypto heads but rather “spiritual crazies” who invented a lot of their claims.

She certainly does attract a lot of attention — good and bad — and there is even a Twitter account presenting an archive of her more standout tweets where she claims, among other things, that artificial insemination for dairy cows is a form of sexual assault.

Altman says she went to the police when the threats escalated and now has security.

What we know for certain if you believe in the charts, however, is that she is assured of more success in her future.

“Not famous, as that is a very loaded word, but I always knew I would be successful. Funnily enough, my own astrology charts are entirely focused on finance, and it never made sense to me until now.”

“In time, I’ll move away from day trading and into angel investing, but I need to build my capital first.”